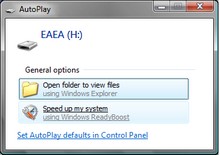 ReadyBoost is one of those Vista features that still has some confusion around it. This post isn’t going to clear all of that confusion up, but some recent discoveries make things a bit less murky in my case.

First, what is ReadyBoost? Here’s the description from Microsoft.

Adding system memory (RAM) is often the best way to improve your PC’s performance. More memory means applications can run without needing to access the hard drive. However, upgrading memory is not always easy. You need to know what type of memory you need, purchase the memory, and open your computer to install the memory—which sometimes can invalidate your support agreement. Also, some machines have limited memory expansion capabilities, preventing you from adding RAM even if you are willing to do so.

Windows Vista introduces a new concept in adding memory to a system. Windows ReadyBoost lets users use a removable flash memory device, such as a USB thumb drive, to improve system performance without opening the box. Windows ReadyBoost can improve system performance because it can retrieve data kept on the flash memory more quickly than it can retrieve data kept on the hard disk, decreasing the time you need to wait for your PC to respond. Combined with SuperFetch technology, this can help drive impressive improvements in system responsiveness.

Windows ReadyBoost technology is reliable and provides protection of the data stored on your device. You can remove the memory device at any time without any loss of data or negative impact to the system; however, if you remove the device, your performance returns to the level you experienced without the device. Additionally, data on the removable memory device is encrypted to help prevent inappropriate access to data when the device is removed. 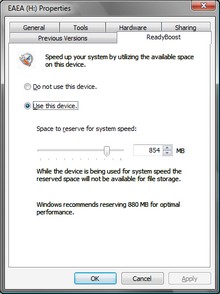 Great and groovy. Pop in a USB thumbdrive and off you go. The only catch there is the USB flash drive needs to be of a certain speed. Of course immediately folks started asking about other media, like SD cards, and there was confusing info on whether or not that would work.

When I first installed a Vista Release Candidate on my Toshiba M200, I gave ReadyBoost a try with a SD card and had no luck, saying the card was not rated to work with ReadyBoost. No matter, I thought. I did try a high speed USB drive and was able to get it to work with the M200, but I just don’t like hanging a USB thumb drive out of a port for any length of time.

When Vista RTM was released, I tried the same tests, with the same results. After I installed Vista RTM on the Lenovo Thinkpad X60, I thought, of course, that I’d give it another try with the SD card, and it worked. The same cards (I tried three) that did not work on the M200 work fine on the X60. (I’m using a SanDisk Ultra II 1.0GB card at the moment.) This leads me to believe that ReadyBoost success has a lot to do with the SD card reader and the drivers for it, in addition and sometimes independent of the media.

If you are looking for a good FAQ on ReadyBoost, here’s a link from Tom Archer’s Blog. Notice that when it was posted there was still some questions unanswered because this was posted around RC1 time and there are later reports that folks have gotten various media and devices (an iPod? Why?) to work with ReadyBoost.

My hunch, and it is only a hunch, is that if you are looking to use SD cards to take advantage of ReadyBoost, you’ll have better success with newer machines than older ones.