Making due on his promise to bring Flappy Bird back, Dong Nguyen has finally re-released the game, but only on Amazon’s Fire TV under the new name Flappy Birds Family.

However, Nguyen (who developed the game) said earlier this year that he would bring back the game at some point, but didn’t know when exactly. And just like that, gamers received a surprise on a Friday afternoon as the game is back and ready to play once again, but there is a catch.

The game is under a new name and is only available on Amazon’s new Fire TV set-top box. While it seems like a strange thing to do, we’re thinking it may have something to do with Nguyen’s apprehensiveness to release the game again, and this could just be the first baby step that Nguyen is taking to bring his game back to the public again.

Nguyen claimed that he initially pulled the game from all of the various app stores because he felt that gamers were becoming too addicted to the game, and said that some gamers would get frustrated with the difficulty of Flappy Bird and send Nguyen hate mail to express their disdain.

Because of this, we’re not surprised that this new Flappy Bird game is seeing a limited re-release.

In any case, Flappy Birds Family comes with some new features that the previous version didn’t have, including a new Person vs Person mode, more obstacles (including flying ghosts). However, the game doesn’t lose the one thing that made it really addicting in the first place. Nguyen says that Flappy Birds Family is “still very hard.”

Gamers can share their best scores with the world and even challenge friends to see who can get through more pipes before making a mistake.

If you don’t have an Amazon Fire TV (which we’re guessing you don’t), then you’re not completely out of luck, as there are plenty of Flappy Bird clones available on iOS and Android, and game developers are even making their own versions for the web browser that you can play on any and every device. 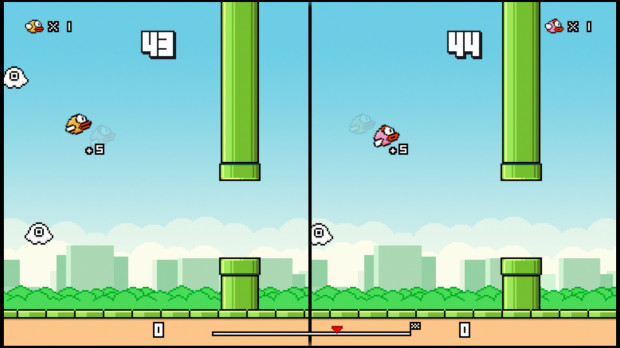 The web browser-based version uses HTML5, which gives it the ability to work seamlessly on any device with a web browser. We’ve tried it in Safari on the iPhone 5s, as well as in Chrome on the Nexus 5. The edges get cut off just a tad on the smaller screens (as you can see above), but that doesn’t impede on playability at all.

Flappy Bird has grown in popularity due to its frustrating and difficult nature. The gameplay style is very similar to the popular Jetpack Joyride mobile game, in which you guide a bird through a series of oncoming pipe openings and take the bird as far as you can for a high score. It sounds fairly simple — and it is — but that doesn’t mean that it’s easy to do, because it’s not.

With that said, we’re not very good at it. Personally, I can barely make it through one pipe without dying, so we’re impressed with those who can make it through several.