Dan Nainan is an avid Tablet PC user and a very funny guy. He uses his TC1100 to read news articles, write new jokes and stay in touch while he travels the globe to perform what he calls “clean comedy.”

Dan wasn’t always a comedian. Prior to getting on stage he worked at Intel and got to work with Andy Grove. I found Dan’s comedy particularly funny because I come from a multiethnic family and can relate to some of what he talks about in this routine:

Dan Nainan wrote in with the following info about his experience wth his tablet:

I am a professional comedian. I also do some voiceover work for commercials, as well as a tremendous number of prank calls in different voices on radio stations, and I’ve also been an actor in a few smaller commercials as well as in two feature films.

My job at Intel was to travel around with the CEO and present highly technical demonstrations of the latest technology during his speeches. I was terribly nervous about speaking onstage, so I decided to take a comedy class, partially to get over stage fright. Much to my surprise, I discovered I had a talent for comedy and was quite fortunate to see my comedy career take off.

The tablet PC is for me really about convenience. It’s sort of a hybrid between a regular laptop and something like the Amazon Kindle. With the tablet I’m able to read the screen either in portrait or landscape orientation. In addition, I absolutely adore the touchscreen interface, and the stylus makes it possible to use the touchscreen with extreme precision.

Despite the fact that tablet PCs have been around for quite some time, it’s really quite rare that you see anybody with them out in public. So when I use my tablet PC on a plane or at Starbucks, for example, it gets a lot more attention than any other computer, including even the new Netbooks or the MacBook Air. I’ve actually gotten dates from women who struck up a conversation with me about my very unique computer. When your computer nerd, you need something to attract women besides your boring self! 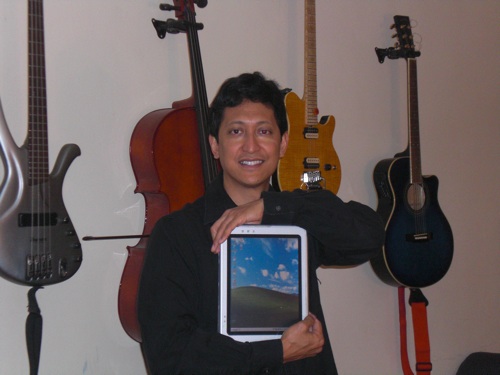 The tablet PC also makes it possible to make impromptu presentations. Quite often if I’m about to go into a casting or a meeting where I want to make a presentation, I get the tablet PC queued up to the video I want to show, then I detach it from the keyboard and I’m able to show the person my presentation without having to open up the laptop and push a bunch of buttons… I just tap the screen with the stylus and we’re off and running. It’s almost like having a flat-panel TV that you can carry around with you.

In order to help the environment, I gave up getting the New York Times on paper. Now I can detach the screen from the keyboard and read the Times using their special Times reader software. I can read the stories in portrait orientation, and just turn the jog dial on the side of the tablet to scroll down the pages.

Furthermore, the tablet PC came with Dragon NaturallySpeaking voice dictation software, so I can actually dictate into Outlook or Microsoft Word without having to use the keyboard… it’s absolutely fantastic in fact that’s how I’m writing this e-mail, completely by voice!

The only thing I would change about the tablet is that I wish HP would come out with another one with the same form factor but with a faster processor — this one’s a little bit older, and I can’t find another tablet like this where I can completely detach the screen from the keyboard!

Dan’s rounded out his computing experience with the following goodies:

As far as technology gear, you’re going to think I’m a super nerd here but then, I just read a study wherein it states that computer geeks make the best lovers! I’ll just list what I use, and if you want me to expound on any of them, feel free to ask!

I’m able to tether the cell phone to my laptop so I can get Internet access anywhere — any hotel, airport, Starbucks, etc., without having to pay a red cent- I use PDAnet.

Magellan Maestro 3100 GPS system — I got this refurbished for $79 from RadioShack it’s awesome!

Video camera for taping my shows

iPod touch 8 GB, ideal for detecting wireless signals and checking e-mail quickly without having to fire up the laptop

On some trips I bring a CardScan card scanner for scanning the many business cards I received. This is an absolutely amazing product.

TV-B-Gone – this is a fantastic piece of gear that lets you turn off any television, anywhere… you simply aim it surreptitiously at the offending TV, hold down the button, and it scans through all of the frequencies until it finds the correct frequency to turn the TV off. I use this to turn off annoying TVs that are blaring really loudly in airport lounges, hotel restaurants, etc. – and it’s really hilarious to see people wonder how the TV went off. As you can probably guess, I despise television.

320 GB Maxtor portable hard drive, for backing up data on the road.

By far one of the most useful pieces of gear I have is decidedly low-tech — it’s a $1.99 yellow rubber adapter that makes one outlet into three — this is great for avoiding confrontations at airports by sharing the extremely rare power outlets!