Initial reports two weeks ago suggested Google was planning an approach similar to Motorola with the Moto X, and could soon be allowing users to select custom color options for its popular flagship Nexus 5. While we don’t see that happening, today they’ve delivered one new color variant.

Following multiple leaks over the past few weeks, today Google released a Red Nexus 5 to the Google Play Store, just as expected. Last week we reported on a February 4th release date, and right on time users can now head to the Play Store and select white, black, and now red for the flagship Android 4.4.2 KitKat powered smartphone. 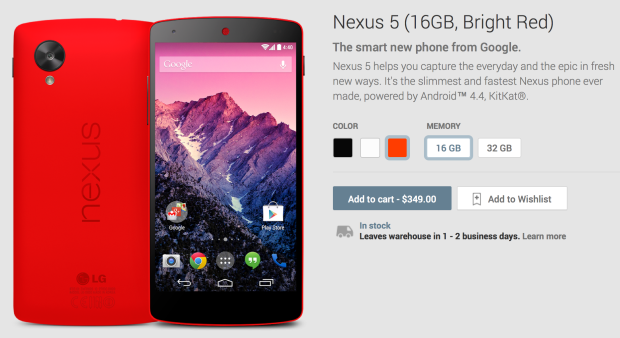 The Nexus 5 was the first Google Nexus device to launch with more than one color option right out of the gate, with previous years delivering a white Nexus 4 months and months later. However, it appears that this isn’t all Google had planned, because you can now get the same stunning smartphone, for the same price, with bright Red instead.

The original leak suggested Yellow, and nearly 7 other colors would be arriving as well, but so far there’s no concrete details to support that rumor. However, we’ve heard more than once a Yellow Nexus 5 would follow the red variant, so we’ll keep our eyes open.

Arriving just in time for users to purchase the new color option before Valentine’s Day, it’s currently available with shipping estimates stating 1-2 business days, so it will be delivered right in time.

As a reminder the $349 and $399 price delivers a stunning 5-inch 1080p smartphone with a quad-core processor, 2GB of RAM, 16/32GB of storage, and a rather excellent 8 megapixel optical image stabilized camera. Head to the Play Store today and get the new color option, and maybe even get it for a loved one for Valentine’s Day.