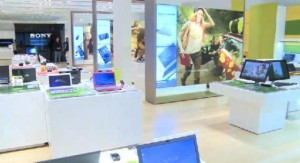 Sony’s reworking its retail experience and is kicking things off in Los Angeles. The new stores are brighter and a more open layout than the old ‘Sony Style’ stores.

Sony will showcase its full product selection at the store, including VAIO PCs, TVs and DSLRs. Sony is the only PC retailer to showcase its computers at company-owned stores, allowing consumers to get their hands on high-end PCs that are rarely carried by national retailers. If you want to sell someone a $2,000 to $4,000 PC, it sure is nice to be able to go hands-on with it before plunking down that kind of cash.

Sony recently shuttered several of its Sony Style stores, including a flagship store in San Francisco. Locations that are still open will be re-skinned with the Sony Store design in the coming months.

The cube, a listening room, showcases Sony’s top-shelf audio/video gear for those with a few extra bucks to spend.

The new Sony Store, located in the Westfield Century City shopping mall opens tomorrow, April 1st. To celebrate the grand opening, Sony is giving away over 100 prices, ranging from a VAIO notebook to a Sony INternet TV. Natasha Bedingfield, a Sony recording artist, will be performing at the mall on April 2.