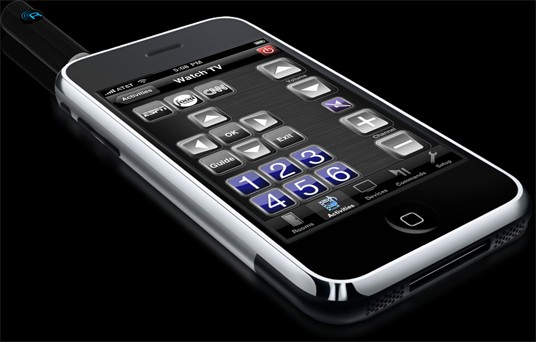 Been going back and forth on universal remotes for my media room, including iPhone solutions, but this RedEye mini from ThinkFlood could have them beat: an IR dongle for the iPhone headphone port, offering macros and touch control for only $49.

Near as I can piece together from the press release and instructions on the regular RedEye, set up involves plugging the dongle into the headphone port on the iPhone or iPod touch, firing up the RedEye app (free, though it only works with the paid product), and either grabbing the right manufacturer code list or copying commands from your existing remotes… one at a time.

Sorry, apparently no magic involved with duplicating the commands from your existing remotes, but once they’re copied (or preferably if your manufacturer codes are available), it’s open season on macros and touch & accelerometer control. For example, a macro could turn on your TV, cable box, and media center with one button, while flicks can be used for flipping channels and a shake could take you to your favorite.

Pretty darn impressive for the price, but after reading up on it, I’m now more interested in the original RedEye, which is an IR remote that’s controlled from your iPhone/iPod via wifi. It’s got a bigger price tag at $188, but there’s no need to plug in anything and it can work with multiple iPhones/iPods at once. On the other hand, the mini can go anywhere, making it a better choice if you’ve got TVs in multiple rooms. Regardless, the macro functionality and touch/accelerometer control make RedEye a very appealing solution for me.