Yesterday evening when I had tried to launch the YouTube app to browse for some Windows Phone videos on my yellow Lumia 1020 smartphone on AT&T’s network, I was greeted by unpleasant surprise. A notification had appeared on the top in a red banner stating that “something has happened and we’re not sure what.” 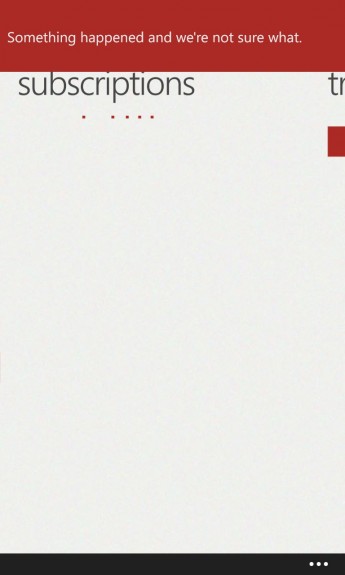 It’s unclear what the problem is at this time. After the toast notification–as they’re called on the platform–disappears from the top, content did not load within the app and I was not able to search or call up any videos.

Microsoft had developed the YouTube client after Google had stated that it would not develop apps for the Windows Phone platform. It’s unclear if Google and Microsoft had really resolved their issues, or if this is just a glitch in the system. A day prior to that when the app had launched, I was able to launch YouTube and sign into my Google account so it was working at some point.

In addition to the Google-demanded changes, Microsoft also added the ability to upload videos to YouTube. Nokia had also introduced a Nokia Video Uploader client–formerly called YouTube Video Uploader–that added that ability to more recent Lumia phones, like the Lumia 925 and Lumia 1020. Microsoft’s efforts not only brings the feature to other Windows Phone 8 devices, but also brought YouTube and its new capabilities to older Windows Phone 7 models.

We’re still awaiting an official response from Google and Microsoft as to what exactly is going on behind the scenes. Whatever the case may be, we’re hoping politics does not prevent Windows Phone 8 users from having access to YouTube.