The competition for no contract, low cost smartphones just get a hell of a lot more interesting today thanks to the launch of Republic Wireless.

It can do this by catering to customers who spend most of their time on WiFi. Instead of sending calls over the cell network, when connected to WiFi your phone will use it to make calls. If you aren’t on WiFi, the phone will use Sprint for voice, text and data.

By using a “hybrid calling” model, Republic Wireless is able to keep costs down. But, there’s a catch. If your calling and data usage on cellular networks is too high, Republic Wireless can revoke your membership. Yes, that’s how they put it, you’re not singing a contract, you’re joining a club of WiFi lovers.

This is a concern, but Republic Wireless says that you can use 550 minutes, send 150 texts, and download 300 megabytes of data without getting booted from the program. I could have trouble with Data, but would be just fine on the texts and voice.

When you get down to it, the plan is almost the same as entry level plans on AT&T and Verizon due to the cell limits in place. The key here is that the phone will use WiFi on its own, without you needing to make a change or use a different service.

When you are connected to WiFi, the phone automatically uses it, no choosing settings or forgetting to toggle a switch, the phone knows what you want to do. 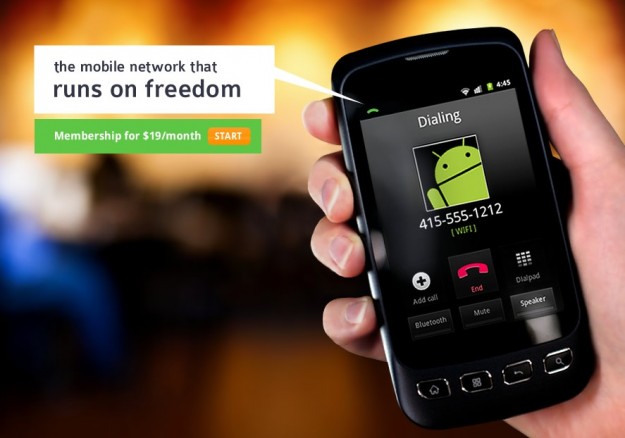 Republic Wireless brings an everything unlimited plan for $19 a month.

The phone, while smart and capable may be the biggest holdback here. Republic Wireless is launching with the LG Optimus with Android 2.3. I reviewed a similar LG Optimus model earlier this year, and was impressed, but wouldn’t make it my daily driver. You can get the phone without a contract for $199, or for a limited tim for just $99 with the coupon code welcome19.

The company is reportedly working on support for additional smartphones, perhaps including the Galaxy SII. Ultimately a company like this will need to offer compelling handsets for bargain callers and smartphone geeks.

Right now this plan beats Virgin Mobile by $16 a month, or almost $200 a year. Compared to the cheapest plans for on contract carriers like Verizon and AT&T, without unlimited data, texts and minutes, you will still save over $700 a year.

Republic Wireless has an attractive value proposition, especially for users who spend most of their time surrounded by WiFi, but I think we will need to see better phones before a significant number of consumers make a switch from Verizon and AT&T to Republic Wireless.

Will you switch over to Republic Wireless?