Review: Logitech Fold-Up Keyboard for the iPad 2 and the Logitech Keyboard Case

Remember the complaints when the iPad was first released that it was only a consumption device? They were legion. Then the App developers got involved and low and behold we’ve seen quite a few folks who have enjoyed creating on an iPad or an iPad 2. They include musicians, artists, and writers.

Of course the trick for writers is having to type on the device. The virtual keyboard on the iPad and iPad 2 is good for casual writing but not really a choice if you have to do some real writing work. Apple recognized this when it made its Bluetooth Wireless Keyboard capable of working with the original iPad on its release.

And since that time we’ve seen a number of keyboard solutions, some doing double duty as cases. (One of the most intriguing and potentially interesting options is the TouchFire keyboard that was funded through a Kickstarter campaign. I’m looking forward to receiving one when they are released.) 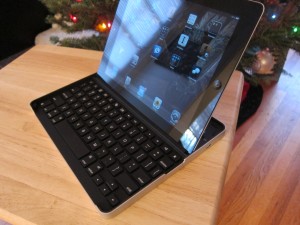 Logitech sells keyboard/case options and the Logitech Keyboard Case for the iPad 2, made by Zagg,  has proven very popular. This keyboard case clips onto the front of the iPad 2 to protect the screen when you are toting it around. It’s made of aircraft-grade aluminum and has military grade padding to protect your iPad 2 if it should take a fall. Pop the iPad 2 our of the case and insert it into the slot (either in landscape or portrait) and you’re ready to go. The keyboard connects via Bluetooth and it contains its own battery that can be charged with the included micro-USB to USB cable.

There is an on/off switch and a connect button. You should only need to pair the keyboard once.

As to typing, the Island style keys work very well, but in my typing trials I find that the aluminum edges of the case hit my palms in an uncomfortable way. I didn’t do any long typing sessions, but I would imagine the discomfort would be worse if I did.

Note that this keyboard case is not full sized. But the newest keyboard/case combo remedies that. The Logitech Fold-Up Keyboard for the iPad 2 delivers a full sized keyboard and a different case option. 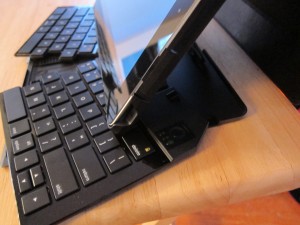 First let’s talk about the fold-out part. Those who may have used the Stowaway BlueTooth Keyboards when they were popular, and other folding keyboards will see some similarities. If you like Transformer-like gadgets you’ll be please here. Unlike the Keyboard Case, the Fold-Up Keyboard covers the back of your iPad, not the screen. But, it has been designed to work with Apple’s Smart Cover. This gives you coverage all the way around. But that comes with a hefty weight gain for your iPad 2 adding just over 1.3 lbs.

But perhaps that’s expected given the fold out option and full size keyboard here. You insert the iPad 2 into the case, hit the button and push the two halves of the keyboard into place and you’re ready to go once you’re paired up via Bluetooth. The keyboard contains its own non-replaceable battery and you can charge it up via the micro-USB TO USB cable that is included. Note that you won’t be doing much charging while you use the keyboard as the connector is on the front right section of the keyboard placing the cable in your way. But then for both of these keyboards you shouldn’t have to charge them up that often.

If you need a full-sized keyboard you this is an attractive option. Once you choose to open this keyboard you’re instantly connected to your iPad 2 so you’re ready to go so there is no on/off button, just a Connect button for pairing, which you should only have to do once.

The typing action feels pretty good to my fingers and I have to say for long sessions, this could be a great option. (I’m typing this review using the Fold-Up Keyboard.) That said, I don’t think I’d tote this with me every day as a keyboard/case option given the weight, unless I was in for an extending period of typing.

I like both products very much and as with most things mobile, how they fit into your kit is really a matter of your personal style and use case. Either option, along with other options out there, give writers the ability to be mobile and get some work done and I think make the iPad’s one thing at a time App on the screen approach work well for those who don’t like distractions. 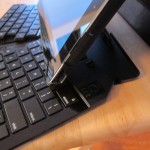 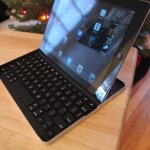 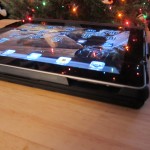 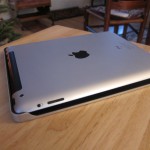 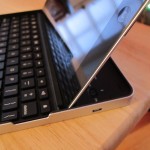 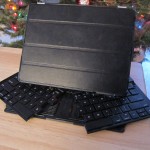 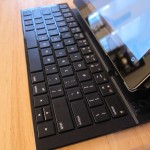 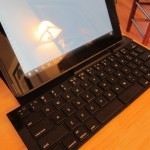 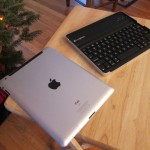 Logitech Keyboard Case side by side with iPad 2