I’ve checked out quite a few different styli to be used with an iPad. I know it is verboten to think of using a stylus on that Tablet, but hey, I do take a lot of notes in rehearsal and quite frankly I don’t like to finger paint when I do so. One of the interesting trends this year has been to see several stylus projects seek funding on Kickstarter. Kickstarter is a way for entrepreneurs to crowd source the process of seeking  funding for a product. If the entrepreneurs achieve their goals they are then supposed to bring their product to market. For the most part if you invest a certain amount you receive the product when it is released. 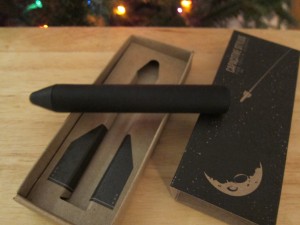 I’ve “invested” in a few of these projects this past year and the first one to make it to market is the Cosmonaut Stylus by Studio Neat. My Cosmonaut Stylus arrived yesterday and I have to say as far as a stylus goes, I’m glad I made the investment. The long and the short of it is that it is certainly on par with what I consider the best stylus I’ve found so far the Aponyo models. Although its shape and size set it apart from the many different styli you can find on the racks at your local Best Buy.

The intent of the designers for the Cosmonaut was to move away from the pen-like look and feel of most of the styli on the market and instead come up with something that had a look and feel of a dry erase marker. Although they don’t state this, I think this is also a recognition that the iPad’s capacitive screen isn’t really ideal for note taking or doodling in the way that true capacitive screens are, (think Wacom digitizers.) In fact they use the phrase “low fidelity” to describe the Inking experience. Note that Studio Neat says the Cosmonaut will work well with any capacitive screen.

So, does this fatter, rounder stylus work well? Surprisingly to my mind, yes. In taking some notes in Penultimate and doing some hasty sketching in ArtRage I found I have just as much control over what Ink gets laid down on the page as I do with other makes and models. Of course much of that depends on the software as well. Both Penultimate and Artrage are as optimized as they can be for laying down Digital Ink on the iPad screen. Using the Cosmonaut in the updated GMail App with the scribbles feature works just as well, but demonstrates that unless an iPad App with Inking capability gives you some sort of wrist-protection or palm-rejection, you’re only going to see good results if you take your time and have good penmanship or drawing skills. I certainly don’t.

The Cosmonaut feels good in my hands making me feel like the designers spent some time thinking about weight and feel. The rubbery surface means it won’t slip out of your hand easily.

Although packaging isn’t a reason to consider any project in my view, I will note that the packaging for the Cosmonaut is clever. When you open the box your stylus looks like a missile ready to launch out of the box. Fun stuff that makes me think the folks behind the Cosmonaut at least put some thought into what they are doing.

So, the Cosmonaut has launched and is now available for $25. Note that shipping is listed at 1 to 2 weeks and if you pay $35 worldwide shipping is free. If you’re an Ink note taker or a Digital Artist on the iPad, or if your children like to doodle on their iPad, I’d recommend giving the Cosmonaut a serious look. 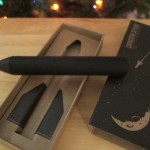 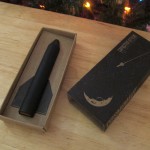 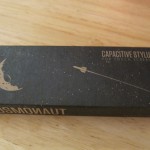 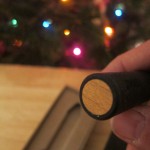 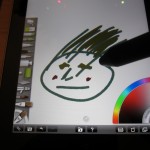 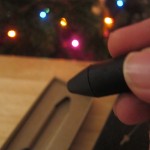