Before I get to talking about the Touchfire keyboard for the iPad, let me first talk about this and other Kickstarter projects. The Touchfire sprang to life as a KickStarter project, and if you are unfamiliar with Kickstarter, it is a service wherein a project developer can seek financial support up front to develop a product. It is sort of like in investing, but not really. If you like an idea, you can support the idea by offering some cash upfront and usually, depending on the amount you put up, receive the product when it is released. The Touchfire keyboard began its life this way and received a lot of support and attention. Unfortunately, like a lot of projects and products, things happened along the way and the debut of the Touchfire was often delayed. I guess one of the benefits of the Kickstarter program is that you can follow those delays as the project developers report the ups and downs along the way. Another may be that it shows just how difficult it can be to take an idea from the idea stage to final shipping product. 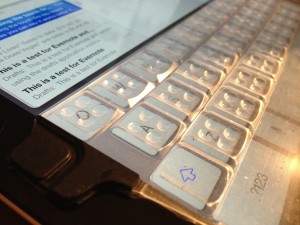 In some ways investing in a Kickstarter project is akin to calling a movie a hit after only seeing the trailer. That can lead to some disappointment if you don’t go in with your eyes wide open. Indeed, quite a few folks have been upset about the delays with the Touchfire and now that the product is available, some are disappointed in the quality of the product itself.

I look at this no differently than investing or gambling. The idea of the Touchfire attracted me. I plopped down some cash. I hoped things would work out. The long and the short of it is that I took a gamble on the project, it didn’t turn out to be what I hoped it would be, and I’ve got no one to blame but myself. But like I said, your opinion on that is going to vary as to how you view Kickstarter, or indeed any investing the way I see it.

But on to the product. The Touchfire is a silicon rubber overlay for the iPad’s keyboard. It attaches to the iPad via magnets. The theory is that it provides you with a tactile response for typing on the iPad’s virtual keyboard. If that’s your thing, I guess this could work for you. I can certainly see it being an aid to those who might be visually impaired.

After finally receiving my Touchfire keyboard I can say it isn’t my thing. I’ve never been a fan of using the onscreen keyboard for the iPad except to fire off a quick email or enter some quick data. Instead relying on the Apple Wireless Keyboard, and of late I’ve moved on from that scenario to the Logitech Ultrathin Keyboard. Both of those options suit my needs better when I use the iPad for long stretches of typing, as I’m doing now.

The Touchfire does essentially work as advertised. Lay it on the iPad. Let the magnets do their thing and type away. Joanna Stern of ABC calls it an iPad condom and unfortunately it sort of feels like that. Even more icky, the gummy silicon rubber overlay gathers dust, dirt specs, and anything else from your fingers or floating around nearby and it can take on the look of a used prophylactic. Although the handy instruction card says you can wash off the keyboard easily by rinsing it in water, that just doesn’t appeal to me. But then again, I guess we’ve all gotten used to Tablet and Smartphone screens and cases that gather fingerprints and gunk. We must be used to them, because manufacturers continue to make them that way and we continue to buy them.

Another problem with the Touchfire is that if you wish to do anything without a keyboard you need to remove it to do so. It is easy enough to do so, and that might not be a problem if you’re into a typing frenzy. But if you go back and forth between Apps the way I do when I’m working, it can get quickly tedious. For this reason I could not ever see myself using the included magnet/velcro caps to adhere it to the Smart Cover to keep it permanently or semi-permanently attached. 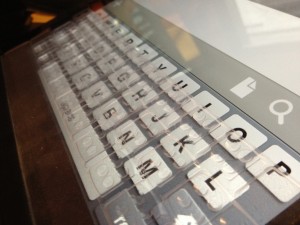 Another thing to keep in mind is how an App you may use displays it’s keyboard. Those that use the built in virtual keyboard included with iOS won’t run into this. But I’ve recently been using the App Drafts to take notes. It’s an iPhone App that scales up (using the 2X button) so its keyboard has a different layout than the Touchfire. So the Touchfire keyboard and this App are incompatible. You can’t blame either party for this certainly, but if you aren’t using the standard keyboard layout, you should be aware.

While I would chalk up the Kickstarter gamble I took with the Touchfire keyboard as a loss, others might not feel the same way. But then, again, like with Tablets, the accessories you use are a very personal choice. This just isn’t one that I would continue to use.