RiviverSoft’s new Start Menu Reviver could be just what those still craving for a return of the Start Menu and Star button have been looking for.

The software, which debuted today, allows users to create a Start Menu and accompanying button in Windows 8 after they’ve purchased a new PC or upgraded their current PC with the operating system.

For many users that could mean all the difference in the world. Some Windows 8 users have complained loudly that without the Start Button, they tend to get lost in the operating system. These users also feel that Microsoft’s requirement to use the Start Screen to launch applications and search their computer just isn’t convenient. 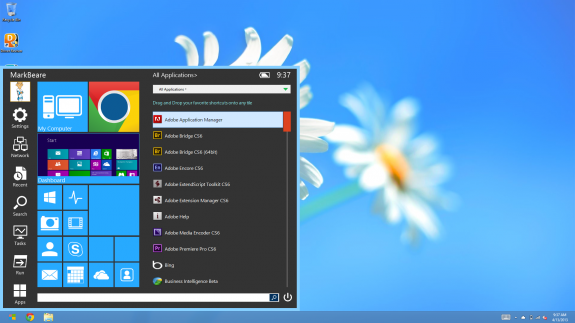 In addition to addressing some workflow issues of some Windows 8 users, Start Menu Reviver also takes it a step further by allowing users to freely customize the style of their Start Button and Start Menu itself.  Using icons that were created in the style called for in Microsoft’s Metro design language, Start Menu Reviver attempts to bring a little bit of the new Start Screen to the user’s Start Menu, giving the user a cohesive, customizable feel.

Users can customize the look of the entire menu with Live Tile-shaped shortcuts to their favorite desktop and Metro applications too. Also, all the colors of the application are fully changeable.

Start Menu Reviver also features built in search mechanisms for finding files, folders, and applications on the PC. Though we found it a little bit sluggish, the fact that you don’t have to use Windows 8’s new Search Charm may also delight lots of users who haven’t found it, or don’t want to use it.

According to ReviverSoft, Start Menu Reviver is available for users of Windows 8 and Windows 7 free of charge and will work on any form factor either operating system ships on including tablets. However, it will not work on Windows RT.

Since the release of Windows 8 a small, but steady, stream of users have complained that Microsoft went too far in trying to modernize the operating system for touch with the new Start Menu and hot corners that it replaced the Star Menu and Start Button with.

Recently, reports have indicated that Microsoft may be preparing to relent and add the start button back in its upcoming update to Windows 8, codenamed Blue.