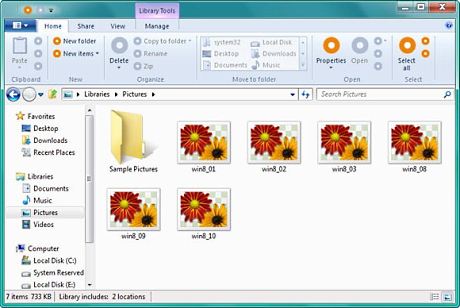 While the debate over how ready Microsoft will make its next iteration of Windows–Windows 8–tablet-ready is continuing, Microsoft is continuing to experiment with the ribbons user interface that was present on Windows 7 and its Office suite and extend the paradigm into Windows 8. Gone will be the menu-driven toolbars in favor of the ribbon, which has graced various Office 2007 and 2010 applications along with Windows 7 core apps like Paint and Wordpad. In Windows 8, ribbons will go system-wide, which will probably help Microsoft tackle the touch-driven computing form factors, including tablets.

In the past, the company has stated that Windows will be the tablet OS of choice, which is a different direction from what Apple is doing. Rather than scaling up its mobile Windows Phone 7 operating system to accommodate the larger tablet screen, Microsoft will be utilizing a full-fledged desktop OS for tablets, a move which can be seen as controversial as Windows in the past has been designed for keyboard and mouse interface, not pen and touch. However, the move towards ribbons may help Microsoft with the tablet market as ribbons provide a more intuitive classifications of actions into categories and the larger buttons are more conducive to touch than smaller text-based options on drop-down menus. For instance, hitting a picture of scissors for the function “cut” is easier to navigate since ribbons provide larger icons for touch than trying to hit “Edit” and then the text for “cut” in the drop-down menu.