While the Bold lineup is more geared at enterprise professionals, the Curve is seen as the more consumer-centric lineup in RIM’s smartphone portfolio, differing visually from its more suit-and-tie brother by offering a front-facing QWERTY keyboard with separate island-style keys, rather than the contiguous key arrangement on the Bold.

Also, unlike the new Bold series, the new Curve does not come with a touchscreen on board, though it still sports the same BlackBerry 7 operating system. The devices are said to support a ‘waterfall’ aesthetics with curved top and bottom, and RIM highlights the soft touch coating on the sides of the device.

As to the models that were announced, RIM announced a Curve 9350, a Curve 9360, and Curve 9370, with the primary difference in the three models being the type of cellular radio(s) they sport for connectivity. The 9350 is a CDMA-only model while the latter two are world-phones. The 9360 is a GSM version with 3G connectivity while the 9370 is a CDMA/GSM world-phone, similar to the Bold 9930 for example. 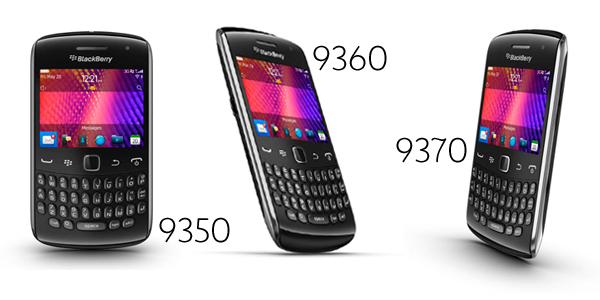 Unlike yesteryear’s Curves, the new Curves now sport a higher resolution screen. Clocking in at HVGA at 2.44-inch, the Curve now has essentially the same resolution as last year’s Bold model and this year’s Bold 9900/9930 takes the resolution up to VGA. It’s nice to see the big jump in screen resolution. Also on-board is an 800 MHz CPU, 512 MB RAM, and a 5-megapixel EDoF camera, similar to that found on many of Nokia’s phones, that can record VGA videos. EDoF will be great for having everything in focus beyond a certain distance, but will do poorly for macro shots if you’re the type that likes to take close-ups of plants, flowers, or other objects.

The Curve was known previously by its codenames of Apollo and Sedona.

This new Curve series is the second line of BlackBerry smartphones to support NFC after the new Bold 9900/9930. Also on board is GPS, WiFi, UMA calling, Bluetooth, and a micro SDHC memory card slot.

The phones are expected to be offered in Canada beginning this month and will most likely make their way across the globe soon after in September.