Last week’s “Wake Up” protest outside a Sydney Apple store wasn’t a Samsung campaign, but a RIM marketing campaign.

According to The Age, RIM has confessed that it was the company behind the campaign which featured fake protesters dressed all in black chanting “wake up” outside an Apple store. The BlackBerry maker admitted the campaign is leading up to a May 7 announcement that it hopes will “provoke conversation on what ‘being in business’ means to Australians.”

The campaign was first recorded by video blogger Blunty, who previously recorded a glowing three-part review of the BlackBerry PlayBook. RIM denied paying the blogger to record the faux protests. It seems the recording was just luck. 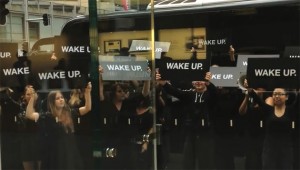 The website for the campaign is still up and running with the countdown to May 7. RIM will likely make an announcement regarding BlackBerry 10 in Australia when the timer runs out.

The campaign hasn’t exactly left RIM in a good light, telling fans of a rival’s OS to “wake up” isn’t the best way to get a positive reaction. RIM should probably stick to hiring comedians to show off its platform, even if the results are still pretty embarrassing.

When the campaign first came to light we, along with many others, thought it was a new campaign from Samsung against Apple. Samsung recently denied those claims, but said “kudos to whoever is behind the campaign.”

Samsung will unveil its new Galaxy S III Android smartphone on May 3, which will likely have more positive buzz than RIM’s BlackBerry 10 which is still months away.