After having seeded its initial batch of developer alpha smartphones in May at its developer conference in Florida, Research in Motion has made some changes since then and is now sending out a new batch of slightly redesigned developer phones. These phones will be running RIM’s forthcoming BlackBerry 10 OS, which will begin to unite the BlackBerry Tablet OS with the BlackBerry OS on the company’s smartphones.

According to a Twitter posting from RIM, the hardware will feature a ‘minor…bump’ with a re-located micro SIM card holder. It’s unclear if RIM had made more changes to the hardware specs of the phone, including RAM and processing speeds.

The BlackBerry 10 Alpha B smartphone–the May 2012 release was considered the Alpha A device–is now being shipped out to developers, according to RIM. 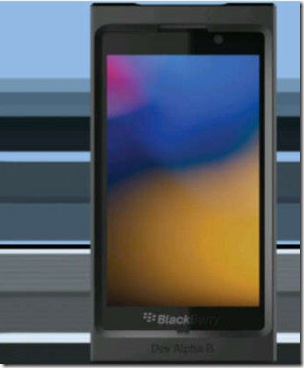 A Twitter pic that was posted and has since been taken down reveals an all-touchscreen slate design. The photo of the device is still present on Berry Review. The phone, with its rounded and curved side edges, reminds me a lot of Nokia’s design for the Lumia 800 and 900, and the chrome trim that separates the glass display from the phone’s body even reminds me of the nearly two-year-old Nokia N8 smartphone, but without the tapering.

In addition to better touchscreen support, RIM will also build phones with its famed keyboard.

BlackBerry OS 10 isn’t expected to arrive until sometime in 2013.