Research in Motion had kicked off its BlackBerry Jam prior to the commencement of CTIA to demonstrate what its BlackBerry 10 operating system will look like and even gave developers in attendance some free BlackBerry developer hardware to play with. Now, after some brief demos of the BlackBerry 10 OS on stage at BlackBerry Jam, RIM is letting loose on a few more tidbits of details about how the next-generation mobile OS will behave with multitasking, gestures, and keyboards. 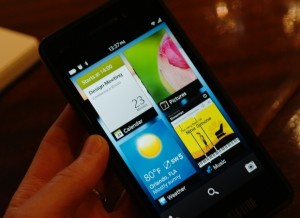 In an interview with CNET, RIM is giving BlackBerry hopefuls a bigger glimpse on what the platform’s future will hold. According to RIM, BB10 is designed to give users quick access and gestures can be used to control the phone from one hand or from a thumb. Rather than app grids and home screens, a la Android and iOS, RIM is opting for more fluid access, similar to what webOS had offered and akin to the paradigm Microsoft is using with Windows Phone 7.

In fact, BB10 closely, in my opinion, resembles webOS and its cards paradigm for multitasking. There will be a grid of four large panes on the home screen and users can swipe left or right to get to where they need:

From this homescreen, swiping to the right takes you to a traditional icon-centric view app view, while swiping to the left brings up a unified inbox view which collates all your communications — from emails and IM to calls, tweets, Facebook updates etc — into one uber feed.

Bhardwaj said key gestures, such as swiping to the left to get to this one-stop-shop inbox, aren’t restricted to the homescreen but can be deployed wherever you are in the OS.

There’s also a looking gesture that can be used to call up notifications:

The most distinctive gesture in BB10 is what Bhardwaj described as “a looking type gesture” or “glancing across” to other content off screen.

This gesture is triggered by holding your thumb down at the bottom right hand corner of the screen which shrinks the view, bringing up a margin at the right hand side where notifications are displayed. Swiping or dragging your thumb further to left brings even more content on screen — such as your inbox, an attachment or an open app.

Along with RIM’s best-in-class front-facing hardware keyboards on devices such as the BlackBerry Bold and BlackBerry Curve, RIM will also make significant strides to improve the software keyboard for slate-only devices without hardware keyboards. These will include intelligent next-word prediction and also smarter and more accurate virtual typing.

Firstly, to try and ensure the best possible keystroke and typing experience, BB10’s software takes notes of where you place your fingers and thumbs on the virtual keyboard and then adjusts its register to minimise typos. If you tend to strike the top left hand corner of the T key when typing that letter it will learn your positioning and register it as perfect keystroke in future so typos are less likely.

Currently, I think Windows Phone 7 and iOS offers some of the best and most intelligent, simple to use software input keyboards on the market today, and it sounds like RIM may unseat these two touchscreen veterans at their game with the new BlackBerry software keyboard.

The keyboard also supports additional gestures. Swiping down anywhere on the keyboard brings up the number view, and from there another down swipe brings up the symbol view. And swiping from right to left will start deleting words, rather than having to repeat tap the delete key.

And not to be outdone in the multimedia department, RIM’s new camera will be much overhauled to compete better against modern smartphone rivals by offering a burst mode and a photo editor.

BlackBerry 10 devices are expected to debut later this year.