A leaked photo of a new, unannounced BlackBerry Curve model shows that Research in Motion will be highlighting its proprietary BlackBerry Messenger, otherwise known as BBM, network more to consumers. The BlackBerry Curve 9320 was shown in the latest leaked image with a dedicated button on the side that will specifically activate and launch the BBM chat functionality on the device without requiring users to scroll through the OS and menus to activate the chat service. BBM is similar to instant messenger services and gives users the ability to send text-based messages, pictures, and files to friends on the network similar to Apple’s recently launched iMessage service. Unlike iMessage, however, users have more control of their contacts on BBM as they are given the ability to add and remove BBM friends and contacts whereas anyone with an iOS device can message anyone else on iOS through iMessage without any security blocks. 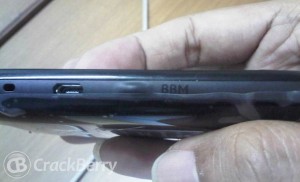 At the height of the BlackBerry empire, BBM was a standout and simple to use service that attracted users and retained users on the platform. Since then, newer platforms like iOS and Android have given consumers more options, but few have a service that can compete with BBM. It’s been rumored multiple times in the past that RIM could potentially license out the BBM service for use on other platforms and devices, but so far nothing have materialized from those speculations.

The BlackBerry Curve 9320 is still not yet announced by RIM, though preliminary leaked specs suggest that the smartphone will run BlackBerry 7 OS and have a 2.44-inch QVGA display that lacks touch-input. The device will have 512 MB of RAM with an unknown single-core processor. A micro SDHC card slot as well as a 3.2-megapixel camera also adorn the phone. The BlackBerry Cyrve 9320 is expected to succeed the low-end BlackBerry Curve 3G.

It’s unclear if RIM intends on bringing a dedicated BBM hardware button to other devices, including the PlayBook tablet as well as other phones in the Curve family as well as those devices in the Bold and Torch series.