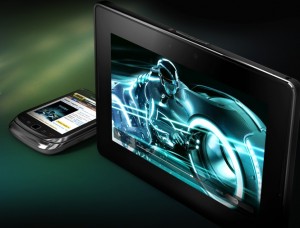 Electronista reports that Research in Motion could be struggling to get the battery life on their BlackBerry PlayBook up to competitive levels. Adding insult to injury is an earlier report on RIM’s initial reaction to the iPhone, also on the topic of battery life.

Regarding the PlayBook, they cite Kaufman Bros. analyst Shaw Wu who has heard that it’s currently getting “a few hours”, far less than what’s possible on the Samsung Galaxy Tab or Apple iPad. A possible solution is a bigger battery, which of course means a heavier tablet. Wu also points out that QNX, the software running on the Playbook, was designed for network equipment and automobiles and never had to be optimized for a mobile device.

By itself, this news is a bit of a headshaker. RIM has always been about mobile devices, so they should be ahead of the game when it comes to thinking about decent battery life. But taken with a story posted earlier on Electronista, it seems their heads were never quite in that space.

According to a poster on Shacknews named Kentor [post now removed], a supposed former RIM employee, the folks at RIM did not believe the iPhone could deliver what Apple was showing in 2007, thinking it “couldn’t do what [Apple was] demonstrating without an insanely power hungry processor, it must have terrible battery life.” He added, “Imagine their surprise [at RIM] when they disassembled an iPhone for the first time and found that the phone was [a] battery with a tiny logic board strapped to it.”

Of course, given the iPhone’s relatively poor battery life compared to other smartphones at the time, they weren’t entirely wrong. But the point is, the iPhone did deliver several hours of usage despite having a giant (at the time) touchscreen thanks, in part, to being essentially a phone built around a battery.

Thus, there really is no excuse for RIM to be caught flat-footed on battery life with the PlayBook. As good as the PlayBook looks, if it can’t go more than a few hours, it’s not going to make it to many users. Not sure how they’ll fix this, but it definitely needs to be fixed.