The BlackBerry Surfboard is now rumored to be Research in Motion’s first smartphone based on the BBX OS platform. BBX was announced as at this year’s BlackBerry DevCon as a means to merge the BlackBerry operating system together with the QNX OS, which the PlayBook tablet is built upon.

Recently, a device with the codename of BlackBerry London was shown with a large touchscreen that marries the UI and UX of the BlackBerry 7 OS and the BlackBerry Tablet OS on the PlayBook. 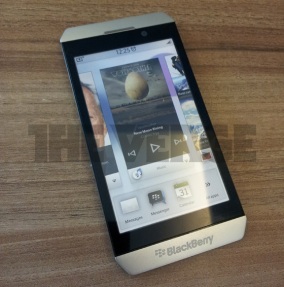 RIM had initially filed for the Surfboard trademark back in July 2010. The unused mark was then given a renewal in Canada in May this year.

The leaked London smartphone shows a device that has a large touchscreen, similar to those on the new all-touchscreen Torch, but with design aesthetics borrowed from the Porsche Design BlackBerry Bold smartphone.

Does the angular design of the London with tapered corners remind you of a surfboard? Either way, it’s tablet design and name may allude to the web prowess of the phone in a more metaphorical sense.