$149.99 gets shoppers all sorts of extras to remember Rise of the Tomb Raider by. Most of the items included in the edition are replica’s of in-game items that have some significance to Lara Croft herself. A brown pouch contains a model of the jade necklace that Croft wears throughout the game’s story. There’s also a replica of the leather-bound journal that Croft shares her thoughts and feelings in throughout Tomb Raider and, presumably, Rise of the Tomb Raider. 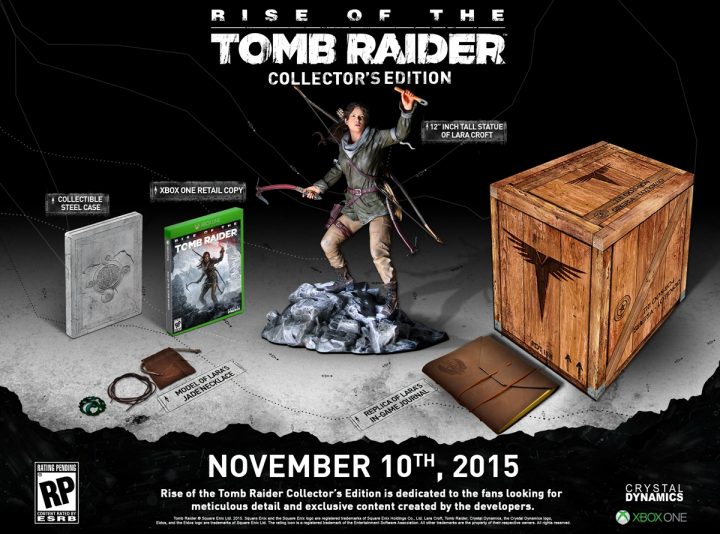 Read: Rise of the Tomb Raider Release: 5 Things to Know

The centerpiece of the Rise of the Tomb Raider Collector’s package is a 12-inch, highly detailed model of Lara herself. The statue has a large, ice-base. She’s wearing her cross-bow and carrying a pick axe and a torch. Rise of the Tomb Raider is set in Siberia Russia, as opposed to the jungle island setting from the last game in the series.

Certainly, it’s great that Square Enix is providing a collector’s edition for users to purchase. Before today, it was unclear whether Xbox One shoppers would have options when it came to the version of the game they’d like to buy. Rise of the Tomb Raider is available exclusive on Microsoft’s consoles on November 10th. The only keep sake we knew about until today was the Rise of the Tomb Raider Collector’s Edition Official Strategy Guide available at GameStop for $34.99.

Collector’s Editions are expensive, but offer series fans something physical to remember the game by long after they’ve stopped playing it. Square Enix hasn’t revealed how it’ll handle any additional content for the game. Neither it or Microsoft have said whether they’ll be an Special Edition Xbox One console or bundle that includes the game either. That’s strange considering Microsoft is hoping that locking down the title gives shoppers another reason to purchase the Xbox One instead of Sony’s PS4 this fall and holiday season.

Regular copes of Rise of the Tomb Raider for the Xbox One and Xbox 360 are available for pre-order now at GameStop for $60.

Read: Free Xbox One games in September Tease Rise of the Tomb Raider