On Sunday June 22nd ABC’s Rising Star music competition will go live and the audience will use the Rising Star app on the iPhone and Android to vote for who wins. ABC is billing the show as making viewers the judge and hoping the appeal of a Rising Star app will draw viewers away from American Idol, the Voice and America’s Got Talent.

Brad Paisley, Ludacris and Ke$ha will play a role as celebrity judges that have some power to help bring the wall up on a Rising Star even if the audience is slow to participate, but for the most part viewers will need to log in to the Rising Star app, connect to Facebook or Twitter and watch live to vote for who gets to continue in this new reality show.

Josh Groban will host the event, and we saw a sneak peek during The Bachelor, which showed how the Rising Star app will work. the event kicks off at 9 PM Eastern on Sunday. 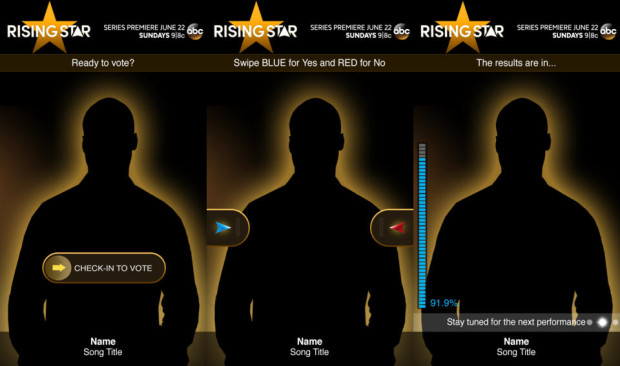 Find the Rising Star app download for iPhone, Android and Windows Phone, to get ready for the premier.

Here’s how to Vote with the Rising Star app. First off you’ll need to download the Rising Star app form iTunes, Google Play and Windows Phone. Go ahead and do that before the show starts. Next up you need to verify that you are over 13, connect to a social network and if you want your face to appear on the wall you need to confirm you are over 18.

When the show starts you can open the Rising Star app and check in. You will then see a photo of the performer on your screen. Swipe the Blue arrow in if you like the performer and want to raise the huge wall. If you don’t want the contestant to continue swipe the red arrow.

Although Josh Groban and the other hosts went through great pains to explain that viewers are in charge for Rising Star, the judges control votes that can make up 21% of a total vote. So while you get a say, Brad Paisley, Ludacris and Ke$ha ultimately count more than viewers at home.

It would not be surprising to see technological issues prevent users from voting with the app during the first live episode of Rising Star, and Fast Company explains how the show will handle any problems. Nicolle Yaron Rising Star’s executive producer, tells the publication,

“We have a non-technological fail-safe in case the app goes down, we have contingency plans in case too many people go through, not enough people go through. We have contingency plans in case of power outages and if the wall doesn’t go up. We have over mechanized [the wall] as well as put in a good-old-fashioned 18th-century rope pull. This is the kind of thing you have to think of.”

It’s a good thing they have a plan because many users report the Rising Star app doesn’t work. On Windows Phone, a user writes, “Every time I try to get in it doesn’t work.” While on Google Play Michelle Clendenney left a one star review saying,

“WTH? Its loaded, I log in with FB and it shuts down. How can an app that ia designed to be used on LIVE television not work now?”

The app also received many negative reviews on iPhone, iPad and Android for the need to login with Facebook or Twitter and due to voting limits for the West coast.