Use the best Rocket League tips and tricks to become a better player, level up faster and unlock vehicle customization options. With a little training and the right Rocket League tips you’ll be beating your opponents with wow-worthy goals and demolitions.

Rocket League is $19.99 on PS4 and the Xbox One Rocket League release date is finally here with special Xbox themed stickers and customizations for your cars.

The basic goal of this game is to use a small race car to push a bigger soccer ball into a goal. It’s fairly close to the fun of playing Rush racing games paired with the competitive side of FIFA. It takes 5 minutes to understand the basics of the game, but with the right Rocket League tips and tricks you can go to new levels. 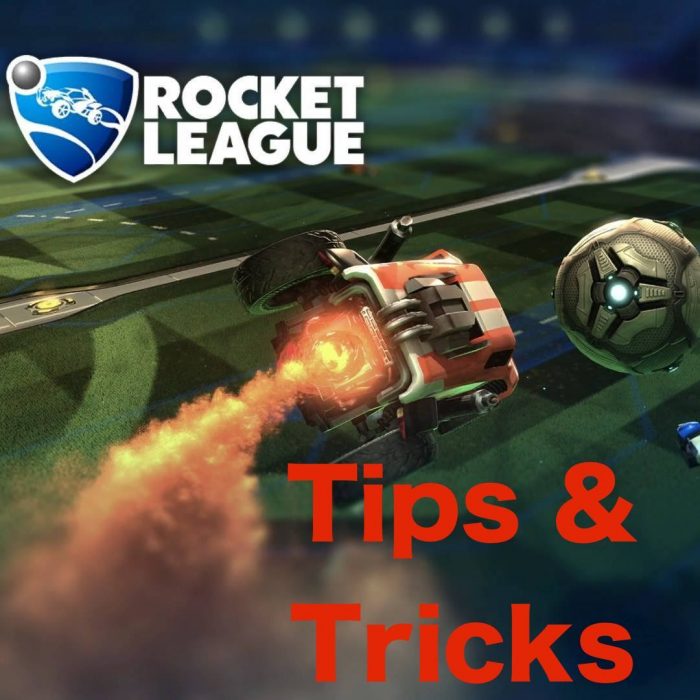 Learn how to be a better player with Rocket League tips and tricks.

Although a racing game with a soccer ball sounds like it is all about fast paced attacks, there is a lot of strategy involved in winning a Rocket League game. If you think, plan and sometimes wait you can score more goals, be a bigger part of the team and have more fun than if you simply rush in.

Here are the best Rocket League tips and tricks that we discovered and that expert players who amaze us with crazy saves, goals and steals share.

Practice Offline or With Friends

When you first start playing Rocket League the best place to do it is in an exhibition match with a friend and bots or simply offline with bots. This will give you a chance to figure out the basics of the game without the pressure of playing skilled opponents.

If you do choose to play in this mode, it’s a good idea to skip over the Rookie difficulty unless you have not played any video games in a long time. Skip up to Pro or higher so that you are playing with team mates and opponents who are skilled.

When you play against a friend in one of these modes you can play with bots, that are computer controlled. This allows tow players to play a full two teams.

Do All Training Modes 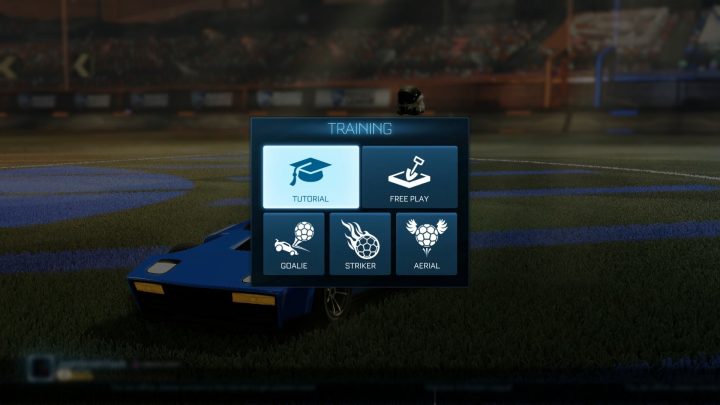 Train for hands on with the best Rocket League tips and tricks.

Rocket League includes two main training modes that show you how to play the game. Do not skip the Rocket League training options or you will constantly wonder how your opponents are flying through the air, flip and kicking like pros.

There is a basic training option with Rocket League tips to get started like using boost, power slide and kicking. The advanced training mode goes into Rocket League tricks like flying, aerial kicks and other advanced tools that will help you score.

After completing those two modes you can go back for tips on playing goalkeeper, shooting and aerial attacks.

If you are playing with a team of real players, not bots, you need to pick someone to play defense as goalkeeper. This is a vital role in Rocket League, and it earns points with saves and clearances.

As you’ll see in the Rocket League tips video later in this post, playing goalkeeper sideways allows better movement from one side of the goal to the next and allows for better defense. A kick or a jump will allow you to make more saves with this style of play.

Unless one player is particularly skilled, make sure to take turns playing goalkeeper in Rocket League.

Don’t Always Go for a Goal

There are many times when you need to avoid shooting the ball, and simply need to pass it downfield to a team mate or whack it into the center of the board so someone can score the goal.

If you are near the edge of the opponents goal perform a kick with the X button to send the ball into the center where someone else can kick it into the goal. Many times simply kicking the ball to center will end up in a goal as a poor defnesive effort knocks it in. 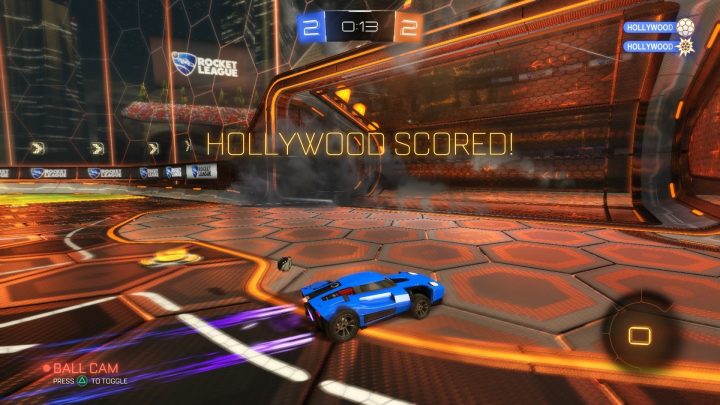 Boost with a goal in mind.

It is easy to run out of boost, but you can pick up more as you drive around. The small orange dots on the field offer small recharges that will help you charge up so that you don’t need to go to a corner for a full can of boost.

Don’t boost everywhere you go, or you will be empty when you really need the boost to fly, knock out an opponent or make a save. Instead of boosting you can double tap X in a forward direction with the gas on to catapult forward for a quick boost of speed without using your boost.

If you aren’t going to be the first to touch the ball at a kickoff, take your focus off the ball and use the limited boost you do have to go for the big boost powerups in the corners. 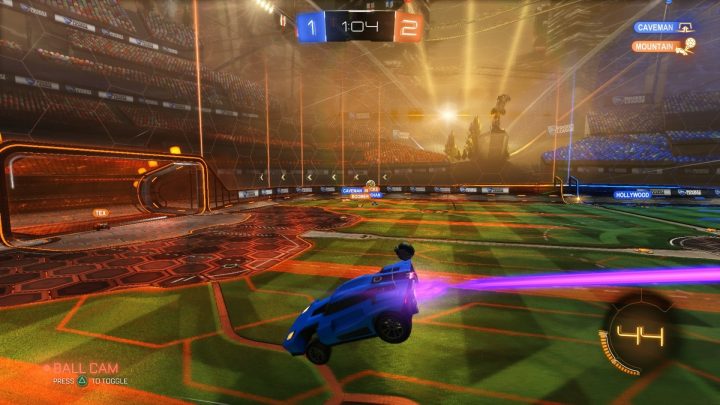 Learn how to fly and you’ll really go places.

Jump, point your nose to the sky and hit the boost to fly up in the air and take out a high-flying cross or avoid waiting in the scrum of players clustered together like a pack of five-year olds playing soccer.

This takes some time to learn how to do, but with practice you’ll be able to line up even multi-hit Rocket Leagueaerial attacks. You can also use a jump and then a second jump while in the air to go higher without the aim of using your boost.

Play With a Team

If you can round up a few friends to play, the communication that comes from playing with friends can help you capitalize on poorly organized opponents. Talk out who is going to attack and who is going to defend. Call for a cross when you are set up so that they know you are ready.

When playing 2 vs 2 with a stranger you can also use the quick text to send a message that you will defend or that you will attack, before the kickoff, so that you both know what’s up.

Take Out Other Players 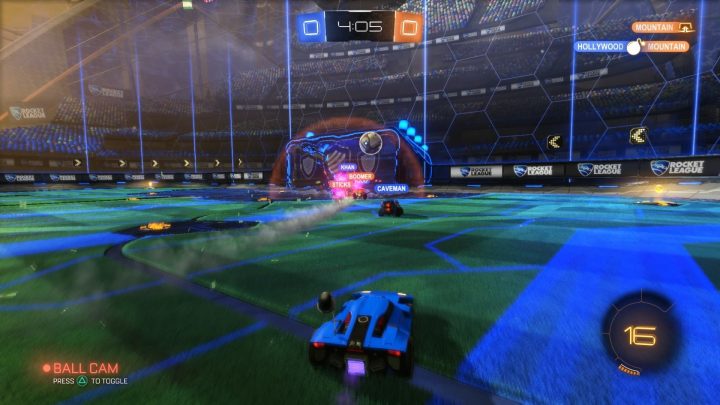 Sometimes the best you can do is take out an opponent.

When you cannot score a goal or hit the ball, you can still play an important role. Boost into an opposing player to destroy them or at least knock the player out of position.

Don’t forget to use this on offense and on defense. If your team is attacking, hit the goalkeeper hard to push him into the goal or to demolish him. When you are on defense nudge or demolish an attacker who is waiting in the center for a cross.

This is seriously one of the best Rocket League tips for being a great team-mate. 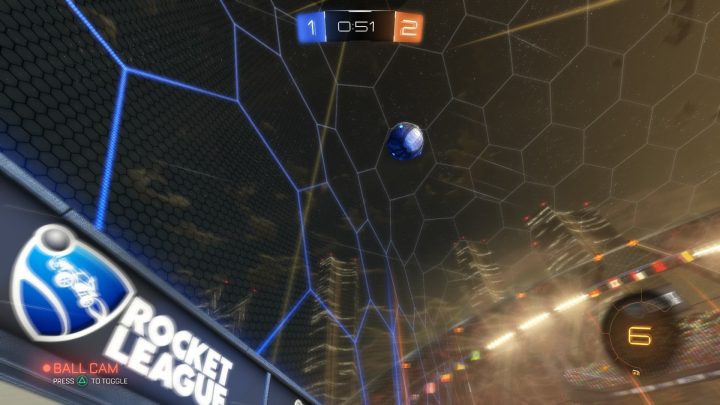 It’s not always good to be looking at the ball.

There are two camera options in Rocket League, and switching between them will allow you to get lined up for a goal or to find and attack the ball.

Experiment with what works best for you and be ready to switch in the middle of the match. When on a run, I often leave the ball cam off and go with a straight view so I know where I am going. The same goes for when I am waiting for the ball to come in to a cross.

While on defense I usually keep ball cam on so that I can quickly react to where the ball is, but when it goes way up in the air I will sometimes turn it off to back up and prepare for the next bounce.

Learn to Play in Reverse

One of the best Rocket League tricks is to play in reverse. While your opponents bounce around to try to get into position, you can back up and score a goal or nudge the ball to a team-mate. This will definitely take some practice, but once you master short or long movements in reverse you’ll quickly outmaneuver the other team in key situations. 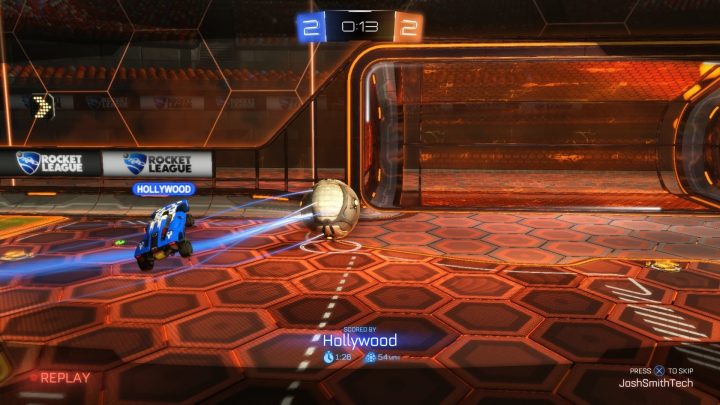 Think before you rush in and attack.

PowerSlide to Get Lined Up

The powerslide is a quick way to spin around and go back on attack or defense if possession changes. We rely on this to quickly switch directions, but as we learned watching the Rocket League tips video above, there are plenty of times where you can do this in the air to turn as soon as you hit the ground.