In an effort to bring a blast from the past into the present, Roller Coaster Tycoon 3 was recently released for the iPhone and iPad, allowing roller coaster enthusiasts of all kinds to build their dream amusement park right on their mobile devices.

While Roller Coaster Tycoon 4 has been available on iOS for quite some time, many gamers argue that the freemium in-app purchase system that the game utilizes has ruined the gameplay for good. Frontier Developments has come in to save the day, though, giving mobile gamers a better option. Roller Coaster Tycoon 3 costs only $4.99 to purchase and there are no in-app purchases whatsoever, which is difficult to come by these days in iOS games.

While Roller Coaster Tycoon 3 is over ten years old, it’s an undoubtable classic that still has high replay value to this day. You can still buy it on Steam and it’s even available in the Mac App Store, so there’s certainly still some demand for it. From that, Frontier Developments figured it was time to expand to the mobile sector and allow users to create amusement parks anywhere at any time.

However, does the iOS version of Roller Coaster Tycoon 3 live up to the legacy that the computer version has created? More importantly, is the game worth playing on a tablet or smartphone, or should true fans stick with the keyboard and mouse when building the roller coaster of their dreams? 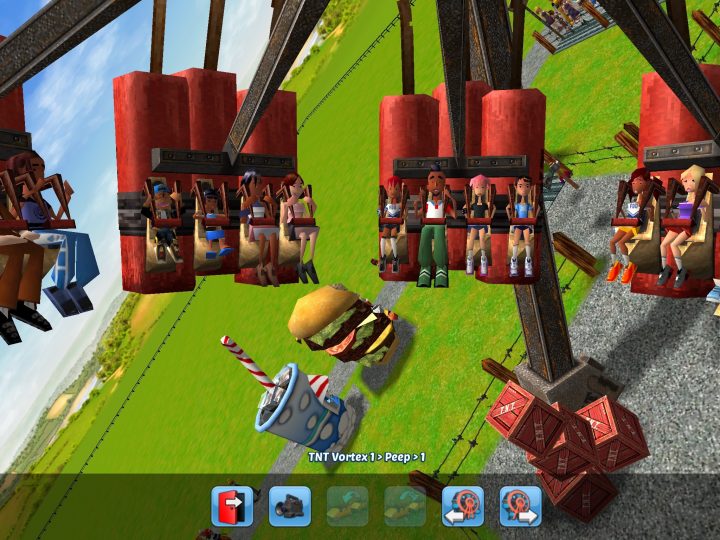 First off, the mobile version of Roller Coaster Tycoon 3 is almost identical to the computer version, coming with the same graphics and gameplay, with only a few tweaks the make the game playable on a touch screen. 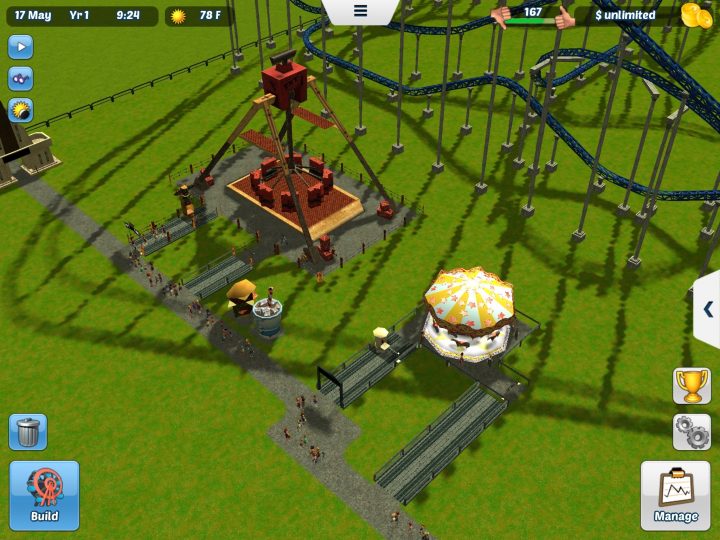 The first thing you’ll notice when firing up Roller Coaster Tycoon 3 and starting a game is that there’s a lot going on, not in terms of what’s actually happening, but that Frontier packed in as many features as it could from the original Roller Coaster Tycoon 3 game, and on a touch screen mobile device, that can be difficult to do.

That was certainly one thing I was worried about: Too many features packed into a screen no larger than my own hand. The game has pretty much all of the same features as the computer version that was released 10 years ago, which is great to use with a keyboard and mouse, but it takes some getting used to on a smaller touch screen using your fingers to control everything. 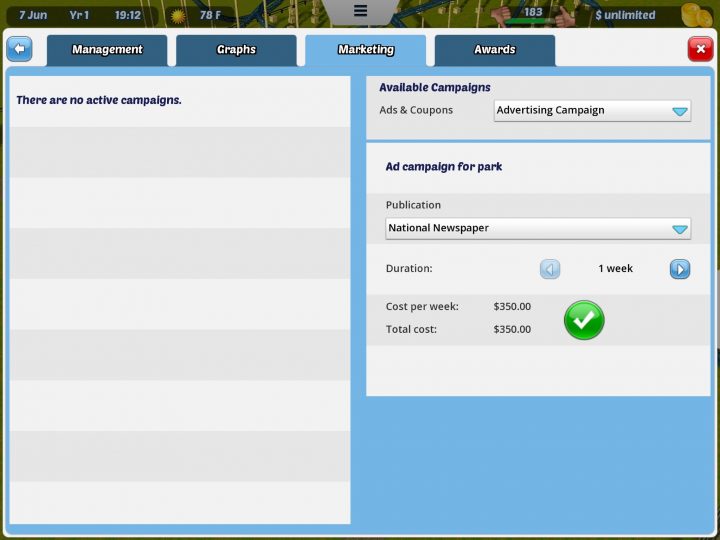 There are a ton of menus to go through, which can seem overwhelming, but with enough time you can memorize where everything is at, so don’t get frustrated when you first fire up the game and realize that the interface is vastly different from the computer version that you’re probably used to. 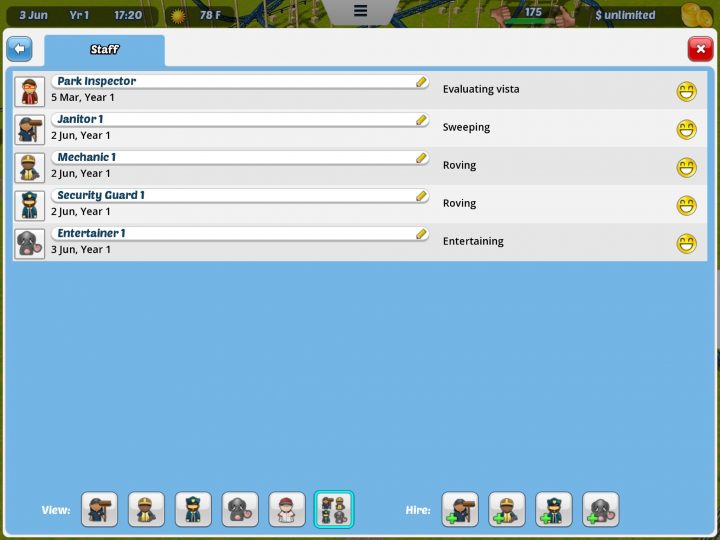 There are a couple of small pet peeves with the game. First off, when selecting things to build at the bottom of the screen, I wish you could swipe up on the object to bring it onto the terrain and then build it from there. Instead, you have to tap on the item to bring into the game and then tap again and hold to drag it around and place it where you want. It’s not a huge deal, but merely just a UI preference that I’ve gotten used to in other iOS sandbox games. 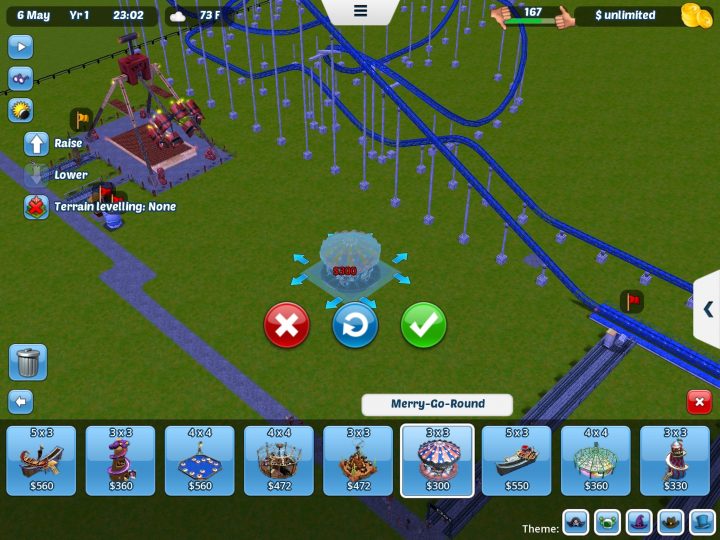 Furthermore, building paths and queues was something that took some getting used to, and I’m still not sure I like how that interface is set up. You have to tap to select a path type and then drag the path to where you want it to start. From there, there are arrows that you tap on to switch the direction of the path and then you can start building it, but you have to tap on an arrow in order to change its direction whenever you need to.

Again, I’m mostly just used to how other sandbox games do it, including SimCity BuildIt (which has a wonderful interface for building roads), but that really just means that Roller Coaster Tycoon 3 for iOS could have done it a bit better. 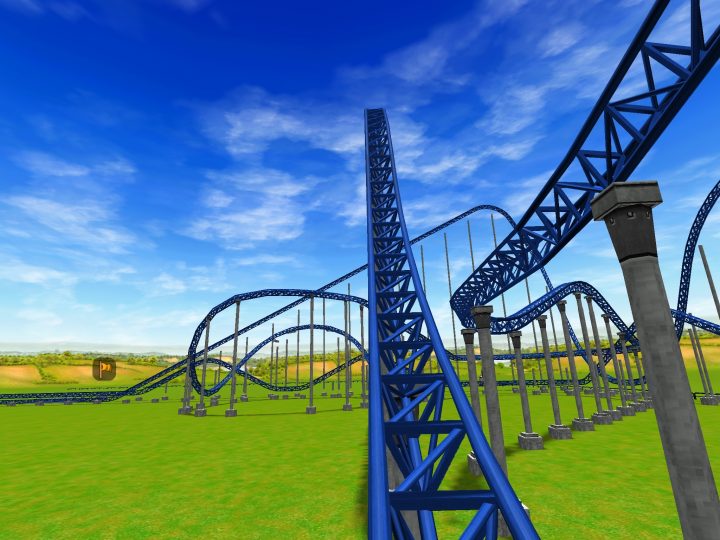 The CoasterCam is probably the best part of the game, and it’s the one thing I absolutely loved about Roller Coaster Tycoon 3 when it first came out. The CoasterCam allows you ride along first-person on any roller coaster that you build, whether it’s a pre-built one that comes with the game, or a custom one that build completely from scratch yourself. Even on a small screen, you feel like you’re actually riding along.

Overall, Roller Coaster Tycoon 3 on iOS is a decent game, and the fact that there are no in-app purchases to worry about makes it even better, but I can’t help but yearn for the older Roller Coaster Tycoon games and their simpler interfaces. If ever the original title or the second one was released on iOS, it certainly would be all over and you’d never see me again.