A new teaser from Rovio hints at a racing game starring the Angry Birds will come to Android and iOS sometime in the near future.

The teaser site for the new Angry Birds Go! shows what looks like the beginning of a race track. The distinct slingshot plays, and the red bird zooms past in a cloud of smoke and feathers. Unfortunately, aside from the genre, the teaser doesn’t show much about the game.

Assuming Angry Birds Go! follows in the footsteps of more traditional Angry Birds games, it will launch first on iPhone, Android and possibly other platforms sometime in the next few weeks. Rovio also releases Angry Birds games on WIndows 8, Mac and Windows Phone, though those users sometimes have to wait to play the game. 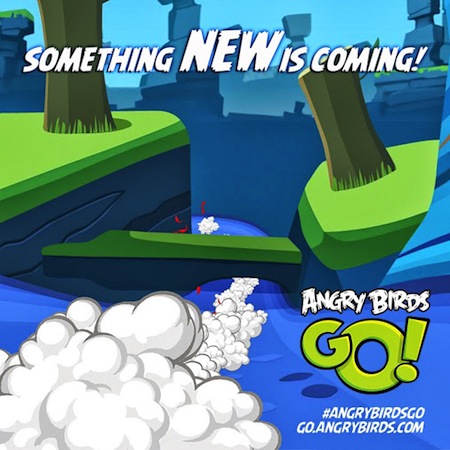 Angry Birds Go! would mark the second game in the Angry Birds franchise that doesn’t ask players to slingshot birds across the screen at the pigs. The last such game was Bad Piggies, which made players build vehicles to help the pigs recover their lost eggs. That game showed Rovio is capable of making fun games without the slingshot.

The new Angry Birds racer may use vehicles like the Bad Piggies game, which would lead to something akin to a Mario Kart game. Using karts would make it easier to incorporate the pigs into the game as well. Without vehicles of some sort they’d never stand a chance against the birds in a race.

As with all other Angry Birds games, there is one thing for certain with Angry Birds Go!, it will open up the chance for even more Angry Birds merchandise. The franchise already has a ton of toys and other merchandise including some Star Wars-based toys, but a racer would let toy companies produce new cars based on the game. That is, of course, assuming there aren’t already toy race cars based on Angry Birds.