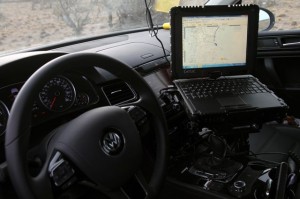 For the 75th Anniversary of the Pan-American Highway, the longest “motorable” road in the world, adventurer Rainer Zietlow is driving a team from Argentina up through the continents to Alaska on the TDI-Panamericana Endurance Challenge. Guiding them on this nearly 16,000 mile trek, providing maps and guidance, is a Getac V100 rugged Tablet PC.

The challenge, which launches today, has the team driving across from one end of South America across to an opposite end of North America in a 2011 Volkswagen Touareg TDI® Clean Diesel SUV. The Pan-American Highway is actually a network of roads spanning nearly 30,000 miles in all. Their “direct” route covers a little more than half that. The Getac V100 with GPS and Gobi 2000 3G module will be critical to keeping them on track to complete the mission in 14 days, as well as providing real-time updates of their location.

Though mounted securely in the vehicle, a rugged computer was necessary to endure the potential dust and shaking due to rocky terrain in some parts of the journey. The Windows 7 tablet is MIL-STD 810G and IP65 compliant. The touchscreen is resistive for glove-compatible operation with optional active pen digitizer. 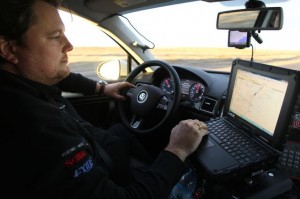 Ushuaia, Argentina / Herndon, Va. – June 23, 2011 – Renowned adventurer and off-road driver Rainer Zietlow and his team today announced they will commemorate the 75th anniversary of the legendary Pan-American Highway with the ultimate endurance challenge. They will embark on a fast, two-week drive from Argentina to Alaska on the longest road in the world, covering 14 countries and nearly 16,000 miles in a 2011 Volkswagen Touareg TDI® Clean Diesel SUV.

Zietlow, Carlos Fernandez and Marius Biela, all from Germany, will start on June 29 in Ushuaia, Argentina, located at the southern tip of South America. Their goal is to drive the entire length of the Pan-American Highway in 14 days, finishing in Deadhorse, Alaska. The crew will travel through 14 countries – Argentina, Chile, Peru, Ecuador, Colombia, Panama, Costa Rica, Nicaragua, Honduras, El Salvador, Guatemala, Mexico, the United States and Canada – and through challenging terrain, including the Atacama Desert, a 13,600-foot high Andean pass, humid rainforests in Central America and the Arctic tundra in Alaska.

As with all of his previous challenges, Zietlow will donate 10 Euro cents for each kilometer driven during this trip to two villages in Latin America managed by Plan International, a charity organization that works in 48 developing countries to promote children’s rights and lift millions of children out of poverty.

“We want to celebrate the important role the Pan-American Highway has played in bringing commerce and unity to countries along the route, while demonstrating the power and durability of a clean diesel vehicle. The 75th Anniversary of the Pan-American Highway provides us with a great opportunity to do both,” said Rainer Zietlow, manager of the German car event agency, Challenge4 GmbH. “While we have completed a number of long distance drives, the TDI-Panamericana Endurance Challenge will be one of our most meaningful and exciting challenges to date.”

Taking five-hour driving shifts, the team will drive non-stop for the full two weeks, testing both the drivers’ will and the Touareg’s endurance. People can follow the drive online by visiting www.tdi-panamericana.com. The site will feature a map and live streaming video to show the Touareg’s real-time progress on the route, as well as photos, video highlights and blog posts to document the thrill of the endurance challenge from start to finish. 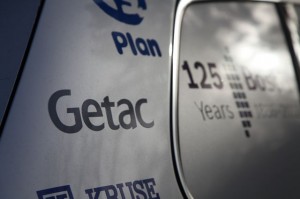 The Challenge4 crew will drive a single 2011 Volkswagen Touareg TDI® Clean Diesel SUV the entire route, demonstrating how the Touareg’s German engineering and powerful engine handle even the most challenging driving conditions. Zietlow chose the Touareg TDI® Clean Diesel for its durability, high-performance and long-range fuel efficiency. Its turbocharged 3.0L V6 TDI® engine, which delivers 225 horsepower and 406 lb-ft of torque, is designed to perform on rugged terrain and mixed road surfaces at varying altitudes.

Additionally, as a clean diesel SUV, the Touareg consumes 30 percent less fuel and produces up to 25 percent lower CO2 emissions than comparable gasoline vehicles. The Touareg’s TDI® clean diesel technology is a key component of “Think Blue.”, the philosophy behind Volkswagen’s holistic approach to preserve the environment through fuel-efficient, high-performing vehicles; sustainable production and advanced technologies.

“The Volkswagen Touareg TDI® Clean Diesel SUV is well equipped to handle the distance and challenges of the Pan-American Highway. It is one of the most efficient vehicles in its class, and offers the durability, reliability, comfort and power that Rainer Zietlow and his team need to complete a drive of this magnitude,” said Rainer Michel, vice president of product marketing, Volkswagen of America. “The TDI-Panamericana Endurance Challenge is an excellent way to demonstrate the many advantages of clean diesel technology.”

Zietlow has conquered a number of extraordinary challenges with Volkswagen in recent years. In 2005, he and his partner Ronald Bormann drove a Volkswagen Touareg to a height of 19,947 feet (6,080 meters) which earned him a Guinness World Record for the highest altitude achieved in a standard vehicle. Zietlow also conquered immense distances in a Volkswagen Caddy EcoFuel and in a Volkswagen Passat EcoFuel powered by compressed natural gas (CNG). In 2006 and 2007, he and his team circumnavigated the globe in a natural gas powered Volkswagen, which earned him a second Guinness World Record.