They say you shouldn’t put all your eggs in one basket. Well, according to the latest rumor, HP is taking that idiom and running with it for tablets with rumors of the Windows 7 HP Slate 500 headed to enterprise, the Android-based eStation Zeen for printers, and now the return of the WebOS-based HP Hurricane, a.k.a. PalmPad. 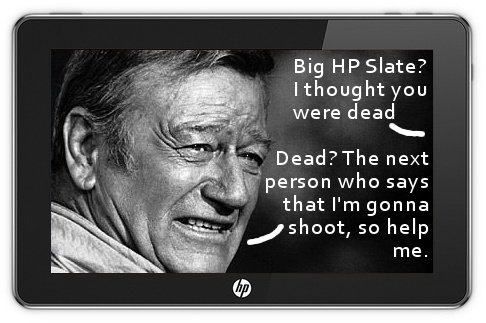 From the movie "Big Jake" - Thanks to dstrauss for the idea!

Engadget reports that several sources have said HP employees were told yesterday that the project known as “Hurricane” is set to hit land in Q1 of 2011. No details about the device were leaked, nor is it known if this will affect any of the other tablet projects that may or may not be in the works. At this point, it seems more likely than not that these projects are running in parallel, but since HP went silent on their tablet plans (going on four months now), we can only speculate on that.

All I know for sure is I’m out of easy “I thought you were dead” screengrabs (sorry, hard to find good ones for Spock “I’ve been dead” and Capt. Sheridan “I’m better now”), and that sentiment no longer applies now that HP seems to have three slates in the works. I’m going to have to find a new theme, like the three-way shoot-out, “Reign of the Supermen” (which is quite fitting since it followed the “Death of Superman“), or movie trilogies.