Even before the slated arrival of Sony’s rumored i1 Honami unveiling at the IFA trade show early next month in Berlin, there are now rumors that Sony may be working on a smaller-sized sibling to the Honami called the Honami Mini. The phone is said to be based off of the design and specs of the Honami, and like the HTC One Mini and the Samsung Galaxy S4 Mini, the Honami Mini will be packing a mean punch for its smaller size.

Like the larger Honami, we’ll be seeing the same quad-core Qualcomm Snapdragon 800 processor, 2 GB RAM, and 16 GB of built-in storage. The Mini will be using a 4.3-inch 720p Triluminos display rather than the rumored 5-inch 1080p full HD panel of the Honami.

The Honami name is likely an internal code name. The phone may launch under Sony’s Xperia line as the successor to the current Xperia Z flagship.

Additionally, for mobile phone photographers, the same larger point-and-shoot-sized camera sensor will also be appearing on the Mini with the same 20.7-megapixel resolution. The optical system will be branded with the Sony G lens, which is a pro-grade lens in the Sony camera lineup, though a step below the more expensive Zeiss-branded lenses. Still, on a smartphone, Zeiss lenses have only been seen on Nokia’s smartphones. The lens will have an f/2.0 aperture. 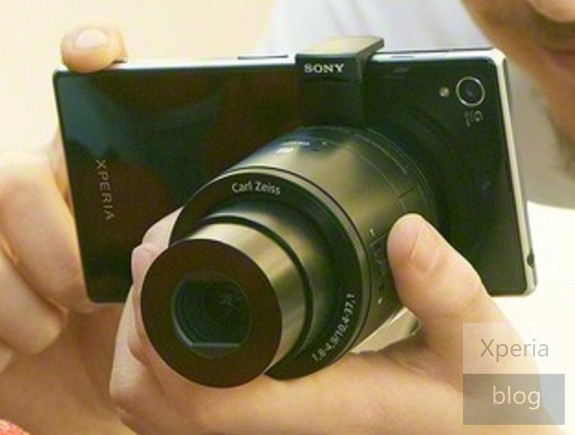 Pictured: Leaked image of the Honami with its own 20.7-megapixel Sony G camera lens and optional interchangeable lens system that communicates with the camera via NFC and WiFi connection.

Likely, the Honami Mini will be able to take advantage of the rumored QX10 and QX100 lens accessories that will debut alongside the Honami in September. The interchangeable lens system will allow Xperia phone users to take their photography to a new level and could challenge Nikon’s and Canon’s position in the DSLR world.

The Honami Mini is said to have the code name of Ray 3 according to a leak found on Esato Forum and published on Phone Arena.

And while the Honami is believed to make its public debut on September 4th at a Sony press event ahead of the September 6th start date for the IFA trade show, it’s still unclear when and if Sony would introduce the Honami Mini.