Originally, it was believed that Nokia would be launching the Lumia 928 and a variant of that phone called the Lumia 925 for GSM markets, but fresh rumors suggest that the company could be using the same media event to launch a 41-megapixel PureView Lumia EOS smartphone running on Windows Phone 8. The media event is scheduled for May 14 in London, and the timing of the event means that Nokia would have to compete against developer conferences in San Francisco hosted by Google and in Orlando, FL hosted by BlackBerry.

The Lumia EOS was originally believed to be announced at Mobile World Congress in late February, but Nokia did not announce the device at that show.

Nokia has so far not revealed what phone model(s) it intends to announce at the event, but a new report from DigiTimes claims that the venue will play host to the 41-megapixel PureView Lumia phone:

Nokia is to host a press conference in London on May 14 and is expected to unveil a new high-end Windows Phone 8-based Lumia phone, which is likely to come with a 41-mega pixel camera, according to market watchers. 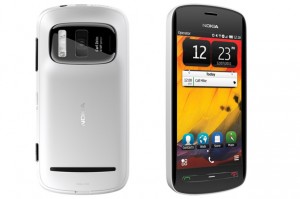 The 41-megapixel PureView technology originally debuted on the Symbian-powered Nokia 808 smartphone, but has not made it to a Windows Phone model yet. Nokia had changed to a PureView 2.0 technology for its most current Lumia device, the Lumia 920, which focuses on different aspects of photography and imaging.

On the original PureView, the focus was on a large sensor with lots of megapixels to allow for fine detail capture and loss-less zooming. PureView 2.0 focuses on low-light photography and the optical image stabilization helps to reduce shake in video recording.

Though DigiTimes has a mixed track record for reporting rumors, the publication isn’t the first to speculate on a 41-megapixel Lumia. In the past, My Nokia Blog had speculated that a 41-megapixel Lumia would be coming given that the May 14 date has numbers that when inversed would spell 41.