Well, anyone who doesn’t think RIM is in a world of hurt by now is either an unapologetic fanboy or on their executive team. RIM’s much ballyhooed Playbook Tablet didn’t live up to the bally or the hoo. Word that a promised update wasn’t going to show its head until next year seemed to have stopped things short in most folks minds.

Well, if you are still interested in the Playbook and fall into the category of what RIM calls a business customer you can pick up a free Playbook between now and the end of the year if you buy two. RIM is also tossing in a free premium accessory as well (HDMI cable, Blackberry Leather Sleeve, or Blackberry Charging Pod.) Obviously this is intended to move as much inventory as possible. RIM has already dropped prices considerably (you can now get [amazon_link id=”B004UL34EY” target=”_blank” container=”” container_class=”” ]a 16GB mode[/amazon_link]l at Amazon for $305), but not at the fire sale prices of this year’s other big botched Tablet hopeful, the HP TouchPad. 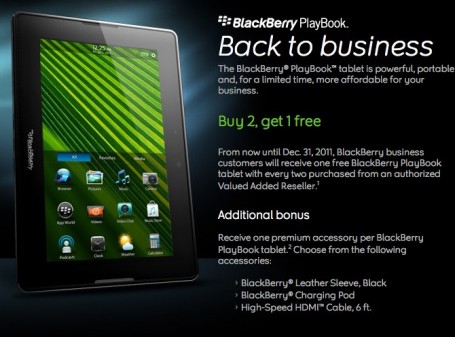 I hate to say it but this is just a sad thing to see.