This is an interesting partnership that on the one hand seems unnecessary, and on the other makes much marketing sense when trying to feature something unique in a crowded smartphone market. (Even though you could be accused of helping to create that crowd.) Samsung announced today that it has created a partnership with bookseller Amazon to deliver a custom Kindle reading experience for users of Samsung’s Galaxy devices. The Samsung and Amazon partnership will also feature free books for Galaxy device users. In the form of a new Kindle App, the service will appear first on the new Galaxy S5 and other Galaxy branded smartphones and tablets running Android 4.0 or higher. 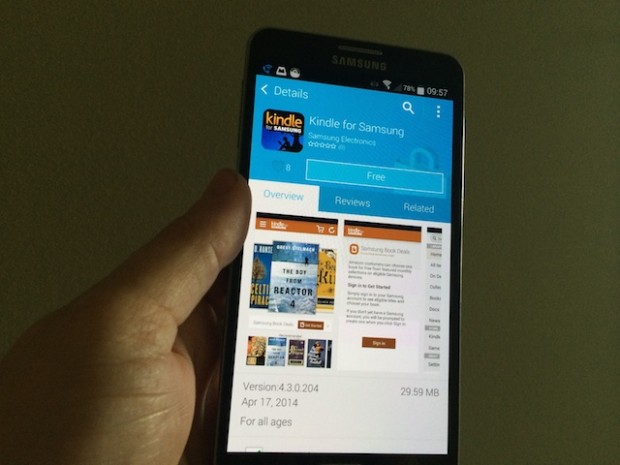 Called Kindle for Samsung, Galaxy device owners should see the new App available today in Samsung Apps. The partnership also features a new service called Samsung Book Deals which will allow users of the service to download 12 free books a year from Amazon’s Kindle store. According to the press release: “Each book is chosen specifically for Galaxy smartphone and tablet users from a wide selection of prominent titles.” The way that works in practice is that each month Kindle for Samsung users will be able to choose one of among four titles that are offered to download. The titles will change every month.

The App will have a different interface from the popular Kindle App in the Google Play Store and will feature Amazon’s Whispersync service that keeps content in sync across multiple devices. The App is currently available from Samsung’s App store called Samsung Apps on mobile devices. In a statement Samsung’s Lee Epting, Vice President, Samsung’s Media Solution Center Europe said:

“We are delighted to be able to deepen our long-standing relationship with Amazon and offer Kindle for Samsung as the perfect app for reading on a smart device. With this service we demonstrate our commitment to creating and broadening key content partnerships that deliver rich and personalized experiences for our customers.”

There are several ways to view this new partnership.

From a consumer standpoint, it can be assumed that current Galaxy smartphone and Tablet owners who are already using the popular Kindle App and Amazon’s services on their existing smartphones will need to de-register those devices through Amazon before downloading the new App and registering their device with the new App.

But let’s examine the Amazon purchasing mechanism. Currently if a shopper who owns multiple devices buys a book from Amazon he or she has the option of which device to send that book too. Once downloaded on that target device, the book can be synced to any other device. The new Samsung Book Deals service mean that customers most likely can only acquire a free book from their Galaxy device. What about Samsung Galaxy users who purchase through Amazon via a desktop or laptop? Will they have to use their Galaxy device to take advantage of the free book offer?

Although the Whispersync service will be a part of the plan, will the free content be available on other devices or Galaxy devices exclusively? Or like with the Amazon Lending Library, Amazon’s free lending service for Amazon Prime members and Kindle Fire owners, will it be available on all devices? Currently the language suggests it will.

Amazon’s Kindle services are available in many countries around the world. While users can already take advantage of those services, Kindle for Samsung will offer readers millions of best-selling books, newspapers and magazines on their mobile devices including over 500,000 titles which are exclusive to the Kindle Store. In addition Amazon services such s the aforementioned Whispersync, and also Time to Read will be available. Time To Read shows how much time it will take to finish a chapter or a book based on personalized reading speed.

Many sites covering this story are reporting that the Kindle For Samsung App will be available later this month. It is available now from Samsung Apps on my Galaxy Note 3. We will check out the experience and report back on what we discover.