To round out its mobile devices with Microsoft software, Samsung today announced its first Windows RT tablet, the Samsung ATIV Tab.

The Samsung ATIV Tab looks like the new Samsung Galaxy Tab 10.1, and has a similar 10.1-inch screen as the Android tablet, although its screen has a 1366×768 resolution. Unlike the Galaxy Tab, the ATIV Tab has a single home button, just like every other Windows RT or Windows 8 tablet. The tablet also has a USB 2.0 port, uHDMI port, a 5MP rear-facing camera, and a 1.9MP front-facing camera.

Inside, the ATIV Tab has a 1.5GHz dual-core processor, 2GB of RAM, and either 32GB or 64GB of internal storage. It also has Bluetooth 4.0 and NFC radios and an 8200 mAh battery. 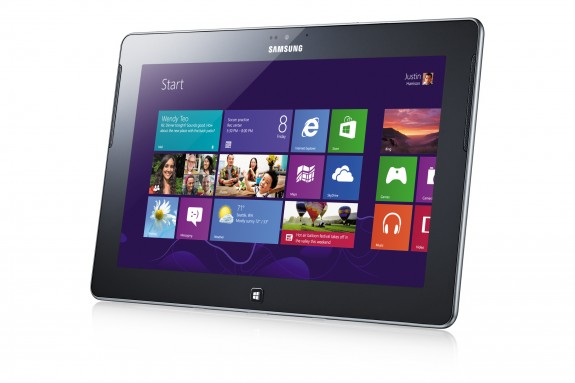 Like all Windows RT tablets the ATIV Tab comes bundled with Microsoft Office Home and Student 2013. Office runs on the traditional desktop environment, but Windows RT doesn’t support any legacy third-part desktop apps. The tablet can only run Windows 8-style apps from the Windows Store.

We don’t know how much the Samsung ATIV Tab will cost when it comes out, or even when it comes out. We assume the tablet will come out around October 26 like the Microsoft Surface. We also assume it will carry a price tag that’s about the same as the Surface.

The ATIV Tab doesn’t have all the extra features of Samsung’s ATIV Smart PC lineup, but it looks like Samsung intends the to market the Tab to the lower end of the market. Whereas the Smart PC and Smart PC Pro can serve as laptop replacements, the Tab is more of just a competitor to the iPad and Android tablets.