Today Verizon announced the Samsung ATIV Odyssey will come to its network tomorrow, January 24, for $49.99 on a two-year contract after a $50 mail-in rebate.

Like the Lumia 822, the ATIV Odyssey is a mid-range Windows Phone 8 device. It has a 4-inch display with an 800×480 resolution and a dual-core 1.5GHz Qualcomm processor. The phone also has a 5MP rear-facing camera, 1.2MP front-facing camera, 1GB of RAM, 8GB of storage space and a microSD card slot for expanded storage.

Samsung bundled a number of exclusive apps into the ATIV Odyssey including Mini Diary, Photo Editor and Now for checking weather, news and stocks. Windows Phone 8 still looks the same as it does on every other device, as manufacturers can’t put custom skins on top of the platform.

The ATIV Odyssey looks like a smaller Samsung Galaxy S3 from the front, with the same brushed metal look on the plastic. The ATIV Odyssey uses capacitive buttons instead of a physical home button, however. The back of the device is also much different from other Samsung devices. 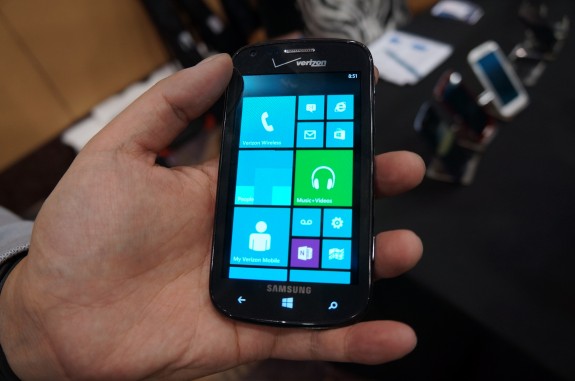