Samsung beat Nokia to the title of first Windows Phone 8 phone today with the announcement of the Samsung ATIV S.

We heard rumors of the ATIV S shortly before the Unpacked event, and Samsung confirmed the phone’s existence at the end of the presentation. The ATIV S looks very similar to the Samsung Galaxy S III with a few changes. The most obvious changes are the aluminum speaker bar on the back of the device and the camera button on the bottom right corner.

The Samsung ATIV S has a 4.8-inch 720p Super AMOLED display and uses a dual-core 1.5GHz processor. The model Samsung showed only has HSPA+ 42Mbps which means it only has “4G” and not 4G LTE. That could mean the phone will come to T-Mobile in the U.S. or Samsung plans a U.S. variant that has 4G LTE. 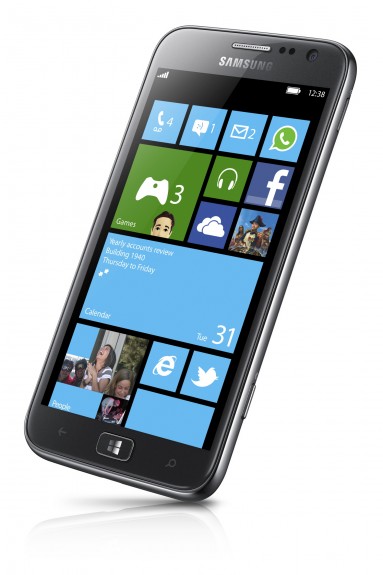 The ATIV S is just 8.7mm thin, but packs a 2300 mAh battery which should hopefully mean long battery life. The smartphones also has an 8MP rear-facing camera and from-facing 1.9MP camera for video chat. It also has NFC for the new Wallet app in Windows Phone 8.

Samsung didn’t announce when the phone will come to market, or what carrier it will launch on. We assume the company is waiting for Microsoft to make its announcements first. Current rumors say Microsoft plans to release Windows Phone 8 in November. If true, that means we’ll have to wait at least two months before we get our hands on the ATIV S.

If the ATIV S is a sign of what’s to come with Windows Phone 8 we’re excited to see the full lineup. We’re still waiting to hear about the new phones from Nokia and HTC.