In addition to announcing the Samsung Galaxy Note 2, it looks like Samsung may take the stage with the company’s first Windows RT tablet announcement.

The Verge claims the Samsung ATIV Tab is in the plans with a 10.1-inch display. The tablet, looks similar to the Galaxy Tab series, but features a prominent Windows button in the middle fo the bottom bezel. 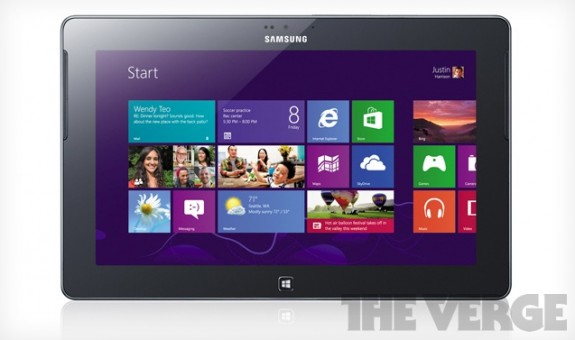 The leak claims Samsung will use a dual-core 1.5GHz processor in the Windows RT tablet, though no mention of the exact processor or speed. The tablet should ship with two cameras, a rear facing 5MP camera and a front facing 1.9MP camera. It’s nice to see manufacturer’s not skimping on front facing cameras.

The ATIV Tab will reportedly measure 8.9mm thick and weigh in at 570g.  The Verge states that the tablet will feature USB connectivity and a “uHDMI” port. The tablet will run Windows RT, which includes a version of Office Home and Student 2013.

Samsung could show off the ATIV WIndows 8 and Windows Phone 8 at the unpacked event which starts in less than an hour, at 1 PM eastern time today. The event is available online as a live stream, and we’re already set up inside the event waiting to see what Samsung announces.

It’s possible Samsung will keep the event focused on the Galaxy Note 2, and will show off the Samsung ATIV brand at a later event or on the show floor.