During Samsung’s announcement of the Galaxy S4, a shot was fired directly across the bow of Apple and their Eyes Free technology.

S Voice Drive is a new feature of the Galaxy S4 that allows full voice control of the navigation system integrated into the phone while still maintaining distraction-free driving. Performing almost all the functions that Siri does, the S Voice Drive software shows you an optimized display for in the vehicle. Without having to press a single button (unlike Eyes Free), S Voice Drive will show you the nearest fuel stations, return an email or text message, or re-route you around construction.

Presently with Eyes Free, the phone must be paired via Bluetooth to an Eyes Free-supported vehicle, and then the driver must press a button on the steering wheel to activate Siri. With S Voice Drive, once the phone is paired with Bluetooth it is constantly listening to the driver for commands. It will be interesting to see this integration in an actual vehicle, because many cars treat Bluetooth commands through Siri as a phone call. What would really make the Samsung system stand out would be a better way to implement the always-on listening technology. 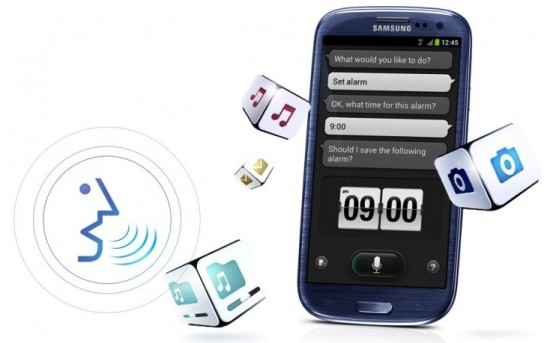 Samsung is clearly trying to make their phone the center of the automotive infotainment system. Since the phone provides messaging, navigation, media playback and more, the OEM solutions become immediately redundant.

RealVNC believes that the phone will become the brain of the system, and have created a system to use the phone as the primary infotainment source. Combining that with S Voice Drive could potentially be the utopian solution that Apple, Google, Ford, and others are looking for. Also, with Samsung’s popularity, S Drive Voice could potentially have the critical mass needed for manufacturer support at the OEM level. It is an exciting time for in-vehicle entertainment and control.