This morning Samsung launched a brand new marketing and ad campaign for the Samsung Galaxy Note 3 and new Galaxy Tab Pro 10.1 tablet, and they’re rather hilarious.

Pairing its latest devices up against the popular iPhone 5S and iPad Air, Samsung’s taking direct aim at Apple here, like they did a few years ago, all while using Lebron James and some clever comedy at the same time. Everything from bashing the tiny screen of the iPhone 5S, to talking about that popular pencil with an iPad Air hiding behind it. We’ve all seen the Apple commercials, and now it is Samsung’s turn. 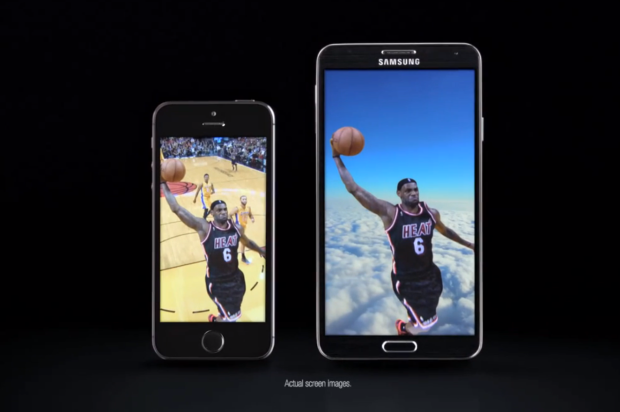 We’re usually not the biggest fans of commercials or adverts that directly attack the competition, as we’d rather the product speak for itself (like the Galaxy S4 did) but these are quite funny. The casual tone, silly wording and clever writing actually makes them worth watching, all while showing off features of each respective device that potential buyers may not know about.

The first new commercial is our favorite and rather hilarious, showing off the new Samsung Galaxy Tab Pro 10.1 tablet and comparing it to the pencil-thin iPad Air. They tease us with Apple’s pencil commercial, and in the end share a few details on what makes their tablet special, and then steal Apple’s pencil.

The second commercial is full of LeBron James and is aiming directly at the iPhone 5s and its rather small display. Pitting it up against the Galaxy Note 3 and its 5.7-inch 1080p HD display, images are vivid and crisp, and video is ever so enjoyable. It isn’t quite the same on a “non-HD” 4-inch screen says Samsung. We’ll let you be the judge.

This isn’t the first time we’ve seen Samsung’s commercials take direct shots at Apple and the iPhone competition, but at least this time around they’re funny and clever. Samsung is certainly keeping the battle and competition alive, and we’ll likely see more once the Galaxy S5 is released.