Samsung, Boost and Virgin Mobile have begun sending out press invites for an event set to take place on August 22nd wherein the companies will announce some “big mobile news.”

The press invite unfortunately reveals absolutely nothing in regards to what the companies might be announcing together later on this month. And while we have no idea about what to expect, we can make a couple of predictions.

Read: Samsung Galaxy Note 10.1 Release Date: What Not to Expect. 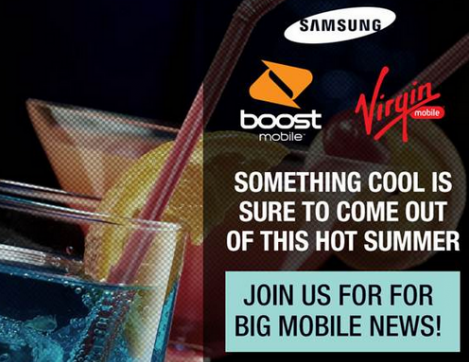 Samsung, Virgin and Boost will be announcing something on September 22nd.

The first possibility is that both pre-paid carriers will be getting the upcoming Samsung Galaxy Note 10.1 which is set to be unveiled on August 15th in the U.S. Two press events seems a little ridiculous but it’s possible that these two carriers want to get the message out loud and clear.

Another possibility is that the carriers will be launching a pre-paid version of the Samsung Galaxy S III, a device that is currently available on all five of the largest carriers here in the U.S., but has not yet arrived on a pre-paid carrier.

The iPhone 4S is now available through Virgin Mobile so it’s very possible that it could be getting some high-end company soon.

We also may see something else entirely. Maybe it’s the Galaxy Note finally going to a pre-paid carrier. Maybe it’s a version of the upcoming Samsung Galaxy S Blaze Q. Or maybe it’s something that has yet to leak out onto to the surface.

Whatever it is though, Boost, Virgin and Samsung are saying that it’s big and that bodes well for those who are customers of those two networks.

Samsung has quite the month of August planned. In addition to this new event on September 22nd, the company will also be hosting events on August 15th for the Galaxy Note 10.1 and August 29th for the upcoming Samsung Galaxy Note 2.

Both devices figure to be integral parts of Samsung’s device lineup for the holiday season which is only a few short months away.