Samsung’s Galaxy Note 3 and the Galaxy Note Pro 12.2 are known for their unique design featuring a stitched leather backing that’s a change of pace from what the Korean company is used to putting out. It seems that users are so overly ecstatic about the leather design that Samsung has decided to bring that look to its Chromebook line, with the announcement of the Samsung Chromebook 2.

The Chromebook 2 will come in 11- and 13-inch screen sizes when it begins shipping next month, and it’ll be priced at starting at $320. The new Chromebook features the same faux leather design as the Galaxy Note 3 with the same stitching around the edges. It may be fake, but we have to say that it looks really good. 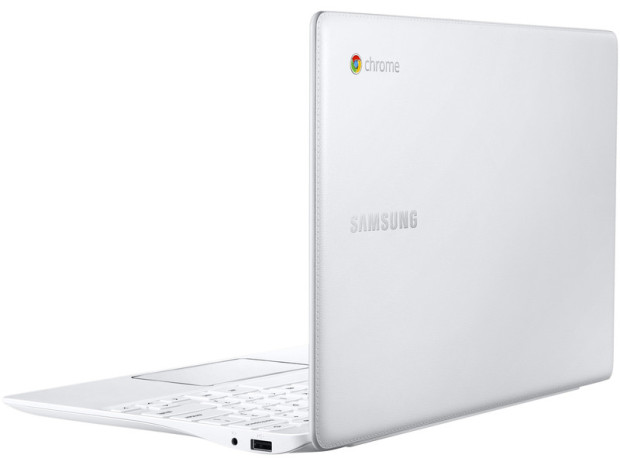 As for specs, the 11-inch model comes with a 1366×768 display, Samsung’s in-house Exynos 5 Octa processor, 4GB of RAM, 16GB of storage and eight hours of battery. The 13-inch model comes packing with a bit more, including a higher-resolution 1920×1080 display, a faster Exynos 5 Octa processor and an extra half-hour of battery life, but it keeps the same RAM and storage.

Unfortunately, only the lid features the leather design, while the bottom casing as the same plastic build as previous Chromebooks we’ve seen. However, it’s still a big upgrade from Samsung’s older Chromebook, which the company released about a year ago. Since then, the competition has gotten fiercer, so Samsung has had to catch up and battle back.

We’re guessing that Samsung will market this new Chromebook to schools and small businesses, as well as anyone wanting to get a hold of a cheaper laptop. Seeing how mostly kids will be handling this new machine (if it gets sold to schools, that is), it may be a bit easier to carry thanks to the grip of the faux leather, but we’ll have to wait and see what the reception is like once the Chromebook 2 has been out on the market for awhile.