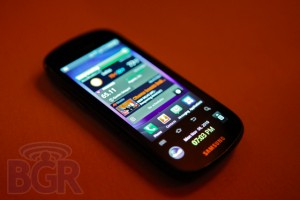 Verizon Wireless and Samsung today announced that the Samsung Continuum will join the carrier’s Galaxy S lineup, which so far includes the Verizon Wireless Samsung Fascinate, with a unique secondary display. The Continuum comprises of a 3.4-inch main display with capacitive touch buttons just below the main display and a smaller 1.8-inch capacitive touchscreen ticker right below that on the device’s front. Although the Continuum looks like a traditional smartphone from the front, the secondary display, also called the ticker, can automatically turn on and light up when you pick up the phone or touch the display so that you can have quick access to information without having to turn on the main display.

The Continuum will retail for $199 after rebates on a two-year contract. The device will come pre-loaded with the Bing experience out of the box and will launch with Android 2.1. Like other Galaxy S models, the Continuum will also feature a 1 GHz Hummingbird processor, 5-megapixel camera with 720p HD video capture, DLNA capabilities, SWYPE keyboard, LED flash, 2 GB of storoage with an 8 GB micro SDHC card preloaded that can be augmented to an optional 32 GB of memory, DivX support, and Samsung’s TouchWiz UI with Samsung’s widgets. The device will also have 3G hotspot capabilities.

BGR got a chance to go hands-on with the Continuum at the Samsung event and says that the dual screens and the capacitive buttons are actually all one piece and not separate pieces: “The screen is fantastic. It’s a Super AMOLED display with separate “ticker” display below, though there aren’t actually two displays on there. The four menu buttons are basically silkscreened over the display, which breaks it up into two separate sections. Software then controls the main section and the ticker section, and they can work independently of each other.”