Samsung had debuted its ATIV branding to accommodate the arrival of new Windows Phone and Windows 8 tablets late last year, and now it appears that Samsung intends on growing the ATIV family with a new notebook. It’s unclear how sales of Samsung’s flagship ATIV S Windows Phone 8 smartphone, the ATIV Odyssey on Verizon Wireless, or any of the ATIV Smart PC and ATIV Smart PC Pro Windows tablets are faring, but Samsung may be introducing laptops under the ATIV moniker. It’s also unclear if the ATIV notebook, like its forebears of different computing genre under the same brand lineage, will also feature touch. 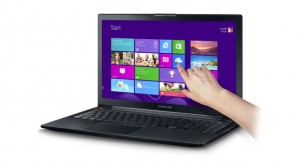 According to Sammy Hub, a listing for an ATIV Book 6 on a retailer’s website was quickly pulled, but from what we can see from a Google cache is that the device looks not unlike the Samsung Series 7 Chronos notebook. The ATIV Book 6 was shown with a retail listing of $1200, and it appears that at least this model will not feature touch.

Many of the specs of the ATIV Book 6 are identifcal to the Series 7 laptop, including a 15.6-inch full HD display, quad-core Intel Core i7 CPU, 8 GB RAM, 1 TB HDD, AMD Radeon GPU, WiDi, WiFi, Bluetooth, JBL speakers, 720p HD webcam, HDMI, VGA, USB 2.0/3.0, and 8 hours of battery life. The main aesthetic difference between the two systems is that the Series 7 was shown with a metal shell while the ATIV Book 6 is shown with a Mineral Ash Black color.

This may mean that Samsung is finally beginning to standardize its product branding. On the Android side, we have the Galaxy brand. That brand is subdivided into various lines, with a Galaxy S flagship phone, Galaxy Note with S-Pen function for artists and creative professionals, Galaxy Tab tablet, and other Galaxy non-flagship phones. On the Windows side, we have the ATIV brand that is subdivided into the ATIV S flagship phone, various ATIV Windows Phone 8 smartphones, an ATIV Smart PC with a tablet and hybrid convertible form factor, and now potentially an ATIV Book notebook line.