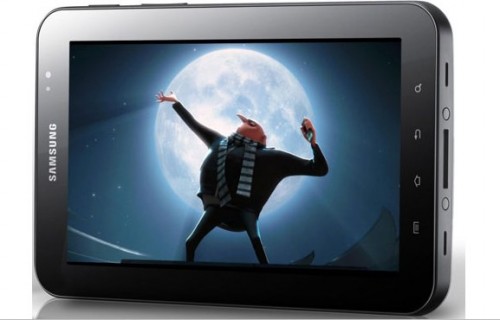 The Galaxy Tab from Samsung has finally been officially unveiled. Yes, it is running Android 2.2, yes it is 7 inches, and yes, everything else we’ve been hearing about it is there including the fact that you can use it as a phone and it runs FLASH. Because it is running the official Android 2.2 you’ve got access to the Android Marketplace and all of the Google mobile app suite, although Samsung seems to have followed tradition and loaded it up with a number of its own apps as well. Samsung is saying that the Galaxy Tab will see Android 3.0 now called Honeycomb.

The processor is a 1GHz Samsung Hummingbird processor and from the videos we’re seeing it looks snappy, although I’ll wait for users to get this in their hands to hear more about that. Samsung seems to have divided things into hubs. For example the reading hub offers you access to the Kobo Reader, Zinio, and a newspaper reading app. The dual cameras offer a 3 megapixel on the back and 1.3 on the front, which sounds a bit weak and reminds me of UMPC days when cameras seemed like a throw in with no attention paid to what they could actually accomplish.

Most of the specs we’re seeing today focus on the European market. It has a price point of 700 euros and there is no word on a US release date or pricing, but because this is Samsung, because this is actually a device they are letting bloggers and reporters touch, and because it is early in the game, the Galaxy Tab is getting all of the iPad “killer” comparisons, whether or not that is fair or not.

Here’s a roundup of what I’ve seen so far.