I’m just going to come right out and say it. My experience with Windows Phone is very limited. I’ve played around with a few devices, the Samsung Focus and Focus S both come to mind, but I’ve never taken one for an extensive test drive. That changed on one of the last days of CES 2012 when I was handed a device for AT&T called the Samsung Focus Flash.

I was and still am excited because I’ve always admired Windows Phone from afar, especially after the Windows Phone Mango update. Again, I had just never gotten the opportunity to use one on a regular basis.

Well, I’ve had the Focus Flash working for a couple of days now  and I thought it time to share with you some of my impressions of the phone and the software as a first time user.

But first, a little background on the device. 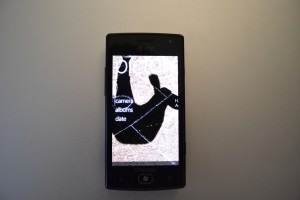 The Focus Flash has been out since November of last year and just about a month after it launched, AT&T dropped its price down to a $1. And that’s not the lowest its going for either.

Amazon currently has it available for a penny on a new tw0-year contract, which led me to award it with a top five listing in our Best Smartphones Available for Penny. And I put it there because of the experience I’ve had with it thus far.

When I first got it, I wasn’t expecting much. Although I had never handled the software before, I knew it was a mid-range Windows Phone and I know that Windows Phone devices – even the high-end ones, don’t have incredible specifications.

So I kind of just wrote the hardware part off and figured I’d focus on the software.

But to my surprise, after unboxing the phone in my hotel room, I was met with a pleasant surprise.

The Focus Flash, even though it’s built from plastic, is surprisingly well made. I guess I should have known considering who the manufacturer is. (Samsung makes great hardware in my opinion.) It feels good in the hand and it’s thin and light enough for my tastes.

Its screen sits at 3.7-inches, just slightly bigger than that of the iPhone. If you’re not familiar with me, I dislike gigantic displays. I’m not a big fan of any screen over the 4-inch mark. In fact, it’s one of the things I dislike about the Galaxy Nexus, which is the best Android phone ever made.

The Super AMOLED screen helps make the operating system, web browsing and photos all look fantastic. The 800 x 480 resolution has so far, rather incredibly, failed to bother me.

If I didn’t know anything about phones, and someone handed me the Focus Flash asking how much it cost, I would not guess a penny, that’s for sure.

So, the hardware – at least thus far, has been great.

But how about the software? 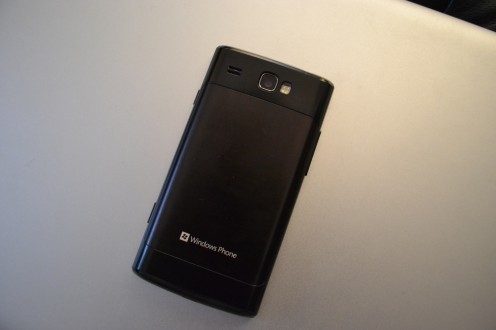 I’ll save my in-depth discussion for the full review but I will make a few points.

First off, I am absolutely loving what Microsoft has accomplished here. The user interface is refreshing, as in, it’s vastly different from both iOS and Android. It looks good. It zips on the Focus Flash’s single-core processor. It’s vibrant, intuitive, and it’s easy to navigate.

Seriously, there are only two main home screens. The first screen has the tiles which house most of the important stuff – browser, contacts, photos. And if you swipe, you go to a navigation screen where you can choose from a multitude of other options.

I am a minimalist by nature and I love the simplicity here.

I’m also enjoying the way Microsoft did the universal Inbox. It allows you to put them all into one tile saving space and making for easy access. Conversations are also threaded which is a huge plus as well.

There are a lot of other things to like here too.

The assorted camera options make taking and storing photos easy – the Focus Flash even has Samsung Photo Studio which allows me to edit my photos even further if I so choose.

The People Hub and the Groups feature that came along with Mango seem like they are going to prove very useful. I like how I can group a few friends together within the People Hub and have the ability to interact with them on social networks or through group text, right from the UI. I very rarely, if ever, even enter the Contacts page on my iOS or Android devices and it’s nice that Microsoft did something unique here.

Microsoft also made multitasking simple. All you need to do is hold down on the back button and boom, you can switch between the things you have open.

Windows Phone is definitely going to take some getting used to, I don’t think I’ll ever be able to come to love Bing or any of its services, it’s definitely an operating system I could see myself using on a regular basis.

I also really like what I am seeing from the Focus Flash so far. I probably wouldn’t buy it myself, the Lumia 900 would be the phone I would get, but I would feel comfortable at this point recommending it to those on a budget.

I’ll be back with a full review of Focus Flash along with some stories about my first real experience with Windows Phone in the near future.