Apple archrival Samsung is preparing to announce its entry into the wearable computer space with a new smartwatch that will compete with the Apple iWatch.

Citing two sources, a report from Bloomberg News, indicates that Samsung will introduce the Samsung Galaxy Gear, a smartwatch that it alleges will allow users to place phone calls, browse the internet, and “handle emails”, using a flexible screen of some kind.

The report doesn’t detail much of the design of the Samsung Galaxy Gear or anymore of its feature set. It does believe that users will get their first glimpse of the device just before the IFA 2013 trade show, on September 4th. That’s the same day that Samsung is likely to unveil the Samsung Galaxy Note 3. 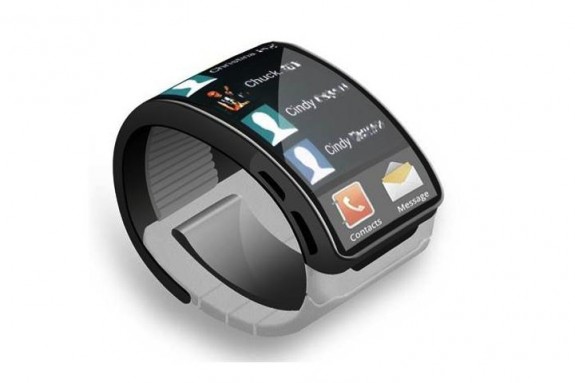 It also mentions why the Samsung Galaxy Gear seems to have appeared out of nowhere for its alleged imminent release. Bloomberg believes that Samsung has marked the device as a priority so that it can have a compelling  product in the wearable computing space before most of its rivals.

So far, Apple hasn’t yet announced the Apple iWatch that has been rumored for the better part of a year. However, Sony has managed to carve out a small place in the wearable computing market already with its own series of smartwatches since 2012. Unfortunately, the company has yet to see any real spark in the space. That could change when the company begins selling the SmartWatch2 this fall.

That Samsung would be putting development of a line of wearable computing devices on the fast track wouldn’t be that surprising. While Apple hasn’t announced any devices in that space, Google Glass has made waves with tech enthusiasts looking to experience the best features of their smartphones on something that they don’t have to carry in their pocket. Google could already be finalizing the hardware that it will sell to consumers inside of Google Glass sometime this year or early next year.

Members of the device’s pilot program can experience Google’s vision of wearable computing already. The company launched an Explorer Program for early adopters earlier this year and has committed to updating those devices with new features on a monthly basis.