Being first introduced and teased back in October, Samsung is gearing up to release another smartphone this month following a successful launch of the Galaxy Note 3. The smartphone is called the Galaxy J, and is essentially an improved Galaxy S4.

Samsung’s Galaxy S4 is one of the company’s most impressive and popular handsets to date, but apparently they want a stop-gap device to hit the market before the much rumored Galaxy S5 arrives next year. To take up that space for a few months is the Galaxy J, which is set to launch in Taiwan on December 9th. It’s an upgraded device all around which is odd given the success of the Galaxy S4, but read on for more details. 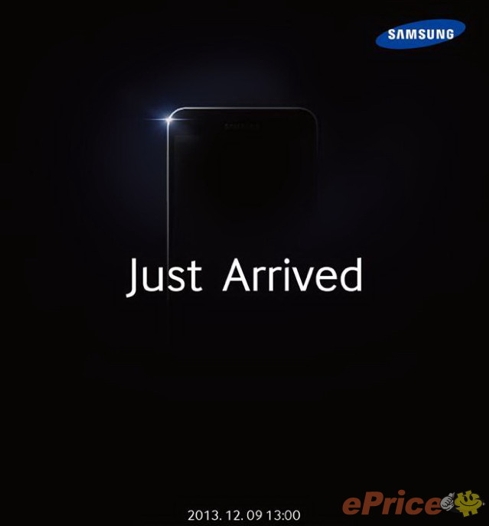 According to ePrice the Samsung Galaxy J will be launching on December 9th, and the image above certainly lends credence to that idea. Showing December 9th on the bottom, which could also be the official unveil with a launch date coming later in December or early 2014.

The interesting fact here is most rumors of late suggest the Galaxy S5 flagship smartphone will arrive earlier than previous years, and actually hit the streets in February or early March, in a nice aluminum design instead of plastic. So there’s much confusion on why they’d launch an impressive and improved Galaxy S4-type device so close to the Galaxy S5 launch.

Samsung’s Galaxy J is tipped to offer a 5-inch 1080p display just like the Galaxy S4, but improved to the newer 2.3 GHz Snapdragon 800 quad-core processor and a bump to 3GB of RAM, and the same impressive 13 megapixel camera on the rear. Basically a blend between the current Galaxy S4 and Note 3. Samsung should be launching this device in Taiwan first, and possibly in other markets soon thereafter. However, it doesn’t appear to be coming to the US, but could be a sign of what the Galaxy S5 could offer early next year.