The Samsung Galaxy Note 3 may be getting most of the attention as of late, which probably won’t make its way to the regional carrier MetroPCS, but another larger screen smartphone will. According to a newly leaked image from TmoNews Samsung’s massive 6.3-inch Galaxy Mega could launch with them instead.

The overly large smartphone launched on AT&T earlier this year, and so far we’ve heard no talks of it arriving for T-Mobile, who’s recently acquired MetroPCS, but we could see it arrive for both soon. However, for all those on the contract-free carrier, this is the biggest phone Metro has offered, and might be the next best thing to the Galaxy Note 3. 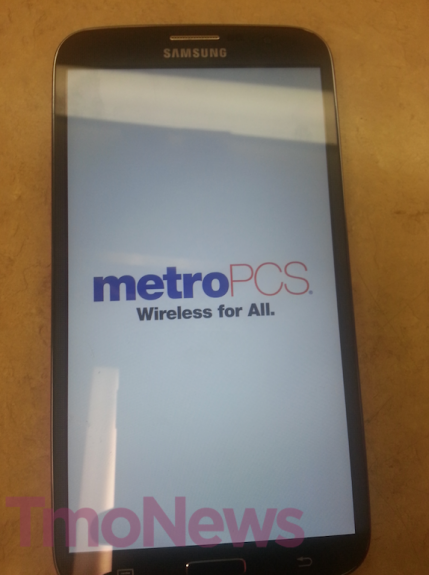 The Samsung Galaxy Mega comes in with a huge 6.3-inch display, but sadly it’s only 720p HD and not full HD like we’ve seen with other recent phones. It also doesn’t feature the S-Pen stylus for drawing, snipping, and taking notes like the Galaxy Note 3, but the important thing is the price. MetroPCS looks to be leveraging the mid-range specs of the phone to its advantage and offering a large device for those on a budget. Considering its biggest phone to date is the 4.9-inch Galaxy S4.

We could call the Galaxy Mega a poor mans Galaxy Note 3, but it’s all about preference. For those on MetroPCS this will be the biggest phone available and if that’s what you’re interested in, this is good news. The smartphone doesn’t have top tier specs with a powerful quad-core processor to rival the some others, but the dual-core under the hood will keep performance smooth, and the price within reach.

The Samsung Galaxy Mega has a quality 8 megapixel rear camera, runs Android 4.2 Jelly Bean, and packs a large 3,200 mAh battery to keep that humungous 6.3-inch screen lit up. So far all we know is a Metro-branded Galaxy Mega has leaked, and we can expect an official announcement to arrive shortly.