A few days ago, GSM Arena got a tip that the Samsung Galaxy Mini was getting a successor, the Galaxy Mini 2. According to their tipster, the Mini 2 has a model number of S6500 and is code-named Jena. Like Samsung needs more models to cloud the waters more. Galaxy Nexus, Galaxy Note, Galaxy S, Galaxy S II, Galaxy S Skyrocket, Galaxy S Skyrocket HD, Galaxy Tab… They are churning out Galaxy “insert hip new name” devices right and left. Slow down my friends. Slow down. 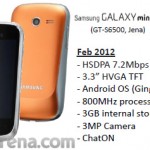 With a 3.3″ screen, 800 mhz processor, 3  megapixel camera, and only 3 gb of internal storage, this phone screams, “FEATURE PHONE”. Let me remind everyone that several years ago, I said on Mobilitysite that Android would become the new feature phone. It’s a safe statement to make today, but back then, people laughed. This phone appears to prove my point.

I am sure it will do for budget minded families if it makes it to the US. My guess would be a free with contract or $29.99 with contract price on US carriers. Unfortunately, technically being a smart phone, the budget minded family will have to shell out more money that they probably want to spend to get a data plan that will be required for sure.

Following up on the GSM Arena story, Engadget found the FCC filing today.