This weekend my Samsung Galaxy Note 3 called 911 while I was working in the yard thanks to the Glove Friendly mode, which allows a user to operate the screen without taking gloves off. I turned this mode on because I wanted to be able to control the Galaxy Note 3 while raking leaves and wearing gloves, but halfway through working I noticed several missed calls and an outgoing call to 911.

I missed the two incoming calls while using a leaf mulcher even with Google Glass on. It wasn’t until I stopped to see how the 49ers were doing that I saw the calls.

Seeing 911 show up on your recent call log, followed by several calls from what turned out to be the local Sheriff’s office is not something you want to see on a Sunday afternoon. 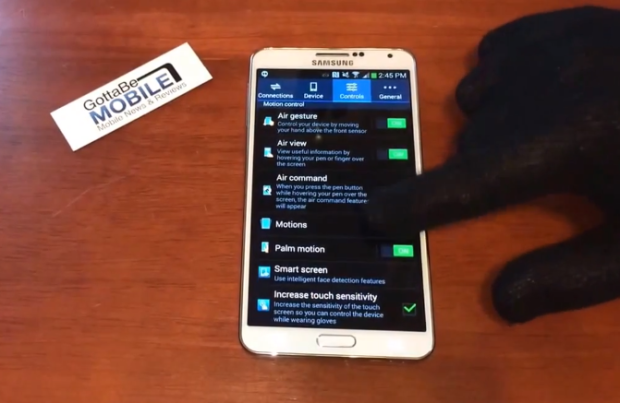 With glove mode on the Galaxy Note 3 pocket dialed 911.

I called back the number and after a short back and forth was able to confirm that it was my phone that called 911, which they chalked up to a pocket dial after I could verify my location. On the bright side, the local 911 dispatcher can locate me based on cell phone GPS. On the downside, I wasted the dispatcher’s time and possibly the time of a Sheriff who may have already been on the way to determine if there was a legitimate need.

Thankfully no officer showed up, but I don’t feel confident carrying the Galaxy Note 3 in a front pant’s pocket with the glove mode enabled anymore. If I plan to do that I will beed to buy a case that protects the front of the screen.

The video below shows Glove mode on the Samsung Galaxy Note 3 in action, including how to turn it on or off.

Keep in mind that Glove mode increases the sensitivity of the touch screen enough that your leg may inadvertently trigger the screen. This may result in lower battery life if the screen keep coming on in a pocket and if there is a lock on the device it may also trigger the emergency dialer and call 911 for you.

Most smartphone screens including the iPhone 5s and many other Android devices will not work with gloves on, so this is not as much of an issue.