These past few weeks two of the most highly anticipated smartphones of the year launched, the iPhone 6, and Samsung’s Galaxy Note 4. Now that they’re both official, Samsung’s already busy with a slew of commercials or TV ads poking fun at Apple’s latest and greatest.

The marketing team at Apple are genius, as we’ve seen some excellent marketing campaigns from them for years and years, but lately Samsung’s had some pretty good ad campaigns highlighting some of their new smartphones and tablet as well. However, this time around they’re pretty awful and cringe worthy to say the least, but get the point across.

As we all know, this week Apple announced the all-new iPhone 6 with a bigger 4.7-inch display, and a massive 5.5-inch iPhone 6 Plus aimed squarely at Samsung’s Galaxy Note lineup. In the past they’ve trash talked Samsung for bigger screens, and now it’s Samsung’s turn to return fire. Check out the five or six new funny (and awful) videos below. 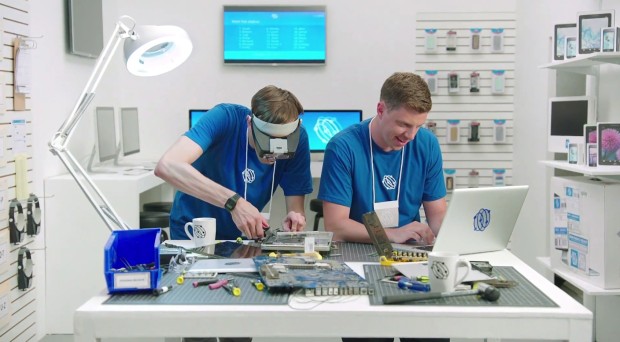 Apple has time and time again made fun of Samsung for their large smartphones, saying that users will never want a screen that big, or that it’s simply “common sense” to make a phone that’s the perfect size for a users hand. Before we start with the new Samsung ads, check out this casual Apple commercial making fun of Samsung for their big screens, even though Apple’s now clearly on the big-screen smartphone bandwagon.

Seeing that for the first time back when the original iPhone 5 launched it was rather interesting as Apple had just increased the size of its flagship smartphone, but not by much. This year though, they’ve made a drastic change by offering a huge 4.7-inch iPhone 6, and a phablet (iPhablet) sized iPhone 6 Plus with a 5.5-inch 1080p HD Display.

Not only is Apple now eating their words and changing tune to keep up with consumer demand, but their livestream of the iPhone 6 was riddled with problems, delays, crashing, and some even called it the “iPhone 6 Vine Launch event.” Samsung’s taking the opportunity to release a slew of new commercials, and as bad as they are, they’re kind of funny at the same time. We’ll start with our two favorites, but check them all out below.

All the commercials are cleverly titled with “It doesn’t take a Genius” which is poking fun at the Apple Genius bars, but they don’t stop there. Here’s a few more to keep you entertained.

Many rumors suggested multitasking or some sort of multi-window mode would arrive with iOS 8 for the iPad, and maybe even the iPhone 6. Sadly that didn’t happen, and Samsung’s showing just how easy that is with all the multi-window modes of the new Galaxy Note 4 in the ad above.

Again, Samsung didn’t just make a few ads, as there are more below.

It is interesting to see Samsung mock the hipster Apple Genius bar employees with their khaki pants and blue shirts, a move that Samsung themselves have copied as of late with their own Samsung booths at Best Buy stores, malls, and even a few dedicated Samsung Mobile retail stores in the US.

Overall this new ad campaign is pretty terrible, but we must admit, they’re pretty spot on when it comes to the bigger screens being late to the party, the watch taking over the announcement, and much more.

In case you missed it, Apple already has a slew of iPhone 6 commercials, and you can enjoy them all right here.