Apple released the iPhone 6 Plus recently, and they gave a lot of attention to the excellent camera, one we thought good enough to potentially replace a point-and-shoot. The new Samsung Galaxy Note 4 also comes with a pretty great camera of its own. We decided to create a Samsung Galaxy Note 4 vs iPhone 6 Plus camera comparison to decide which new flagship phone offers the best option for buyers who love to take photos and video with their phone.

In our head-to-head Samsung Galaxy Note 4 vs iPhone 6 Plus camera comparison, we’re looking at how well the two shooters handle almost any situation a phone photographer might want.

Click this image to see a larger side-by-side comparison of unedited shots.

Two things that stand out in this camera comparison. The Note 4 image brings us closer to the activity than the iPhone 6 Plus does, thanks to the wider angle of the iPhone lens.

Second, the Note 4 color looks more accurate, with white balance showing the right wall color. The iPhone looks slightly warmer than it should.

The Samsung shot comes in at 16×9 and 16MP by default. The iPhone 6 Plus shoots in a more traditional 8×10 aspect ratio at 8MP. In nearly all of our comparison shots the iPhone produced brighter images with a wider angle, while the Note 4 camera shots looked darker, but offered more white balance and sharper images. Despite the difference, both shots looked very nice. Still, for color accuracy and detail, I’d give the nod to the Samsung Galaxy Note 4.

The portraits of my son show the same differences seen in the snapshots.

The iPhone does a better job of making Michael’s skin look attractive, but that’s because we don’t get the same level of detail.

The Samsung Galaxy Note 4 shoots in a mode called Beauty Face. Look at the forehead of my son below compared with the two shots above. His blemishes don’t show up while the eyes and beard stay in sharp focus.

The zoomed in shots side by side below show how this effect looks in a full-sized image.

This shows the Samsung Galaxy Note 4 camera portraits with a regular shot on the left and a Beauty Face shot on the right.

Whether the user wants more detail or a smoother complexion, the Note 4 camera wins on both counts.

Parents often pull out their phones to take pictures at a kid’s concert or play. I took the shots below at my son’s chorus concert.

The Samsung Galaxy Note 4 shot above offers the best color, especially in the curtain above the stage. The white shirts still look a little blown. The Note 4 lens brings us closer to the choir The iPhone shot below looks kind of lifeless.

iPhone 6 Plus low light shot taken at a concert.

We didn’t have the best seats, so I used the digital zoom on each camera. The Note 4 lens brings us closer to the the singers in the zoomed shots too.

Both shots look more blurry than the regular shots. We get the same warmer and colorful shots on the Note 4.

iPhone 6 Plus low light shot take at full zoom at a concert.

In this particularly challenging setting, neither phone did a good job, but the Note 4 images look better.

Macro shots offer extreme close-ups, which causes problems for some lenses because they can’t focus that close to the subject. Click each image and see that the first shot, taken with the Note 4, looks fuzzier. 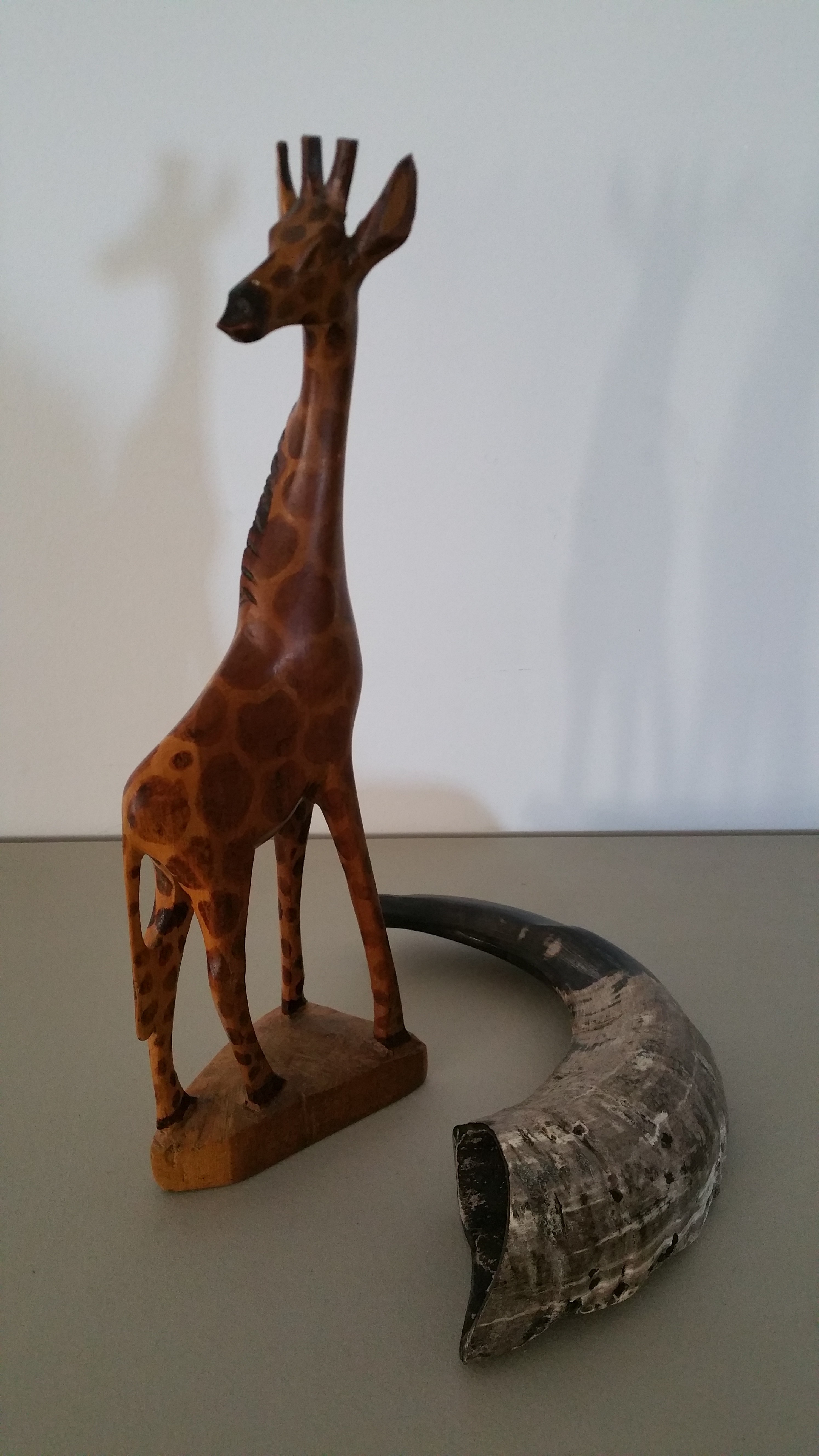 The iPhone’s shot isn’t very sharp either and introduced more grain into the image thanks to the low light. 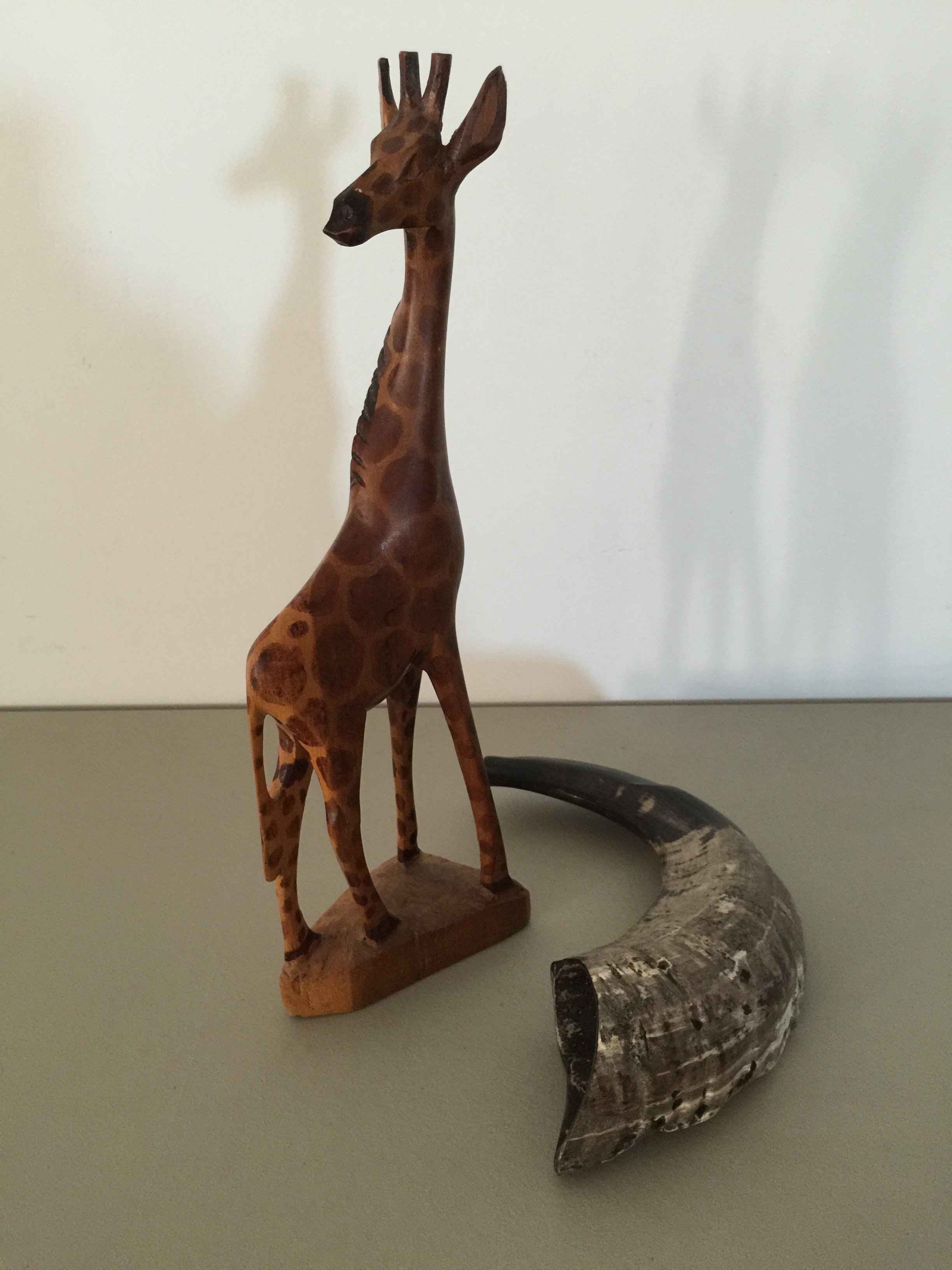 The iPhone 6 Plus camera’s fast f2.2 lens brightens the low-light macro shot, even if it does look more grainy than the Note 4. 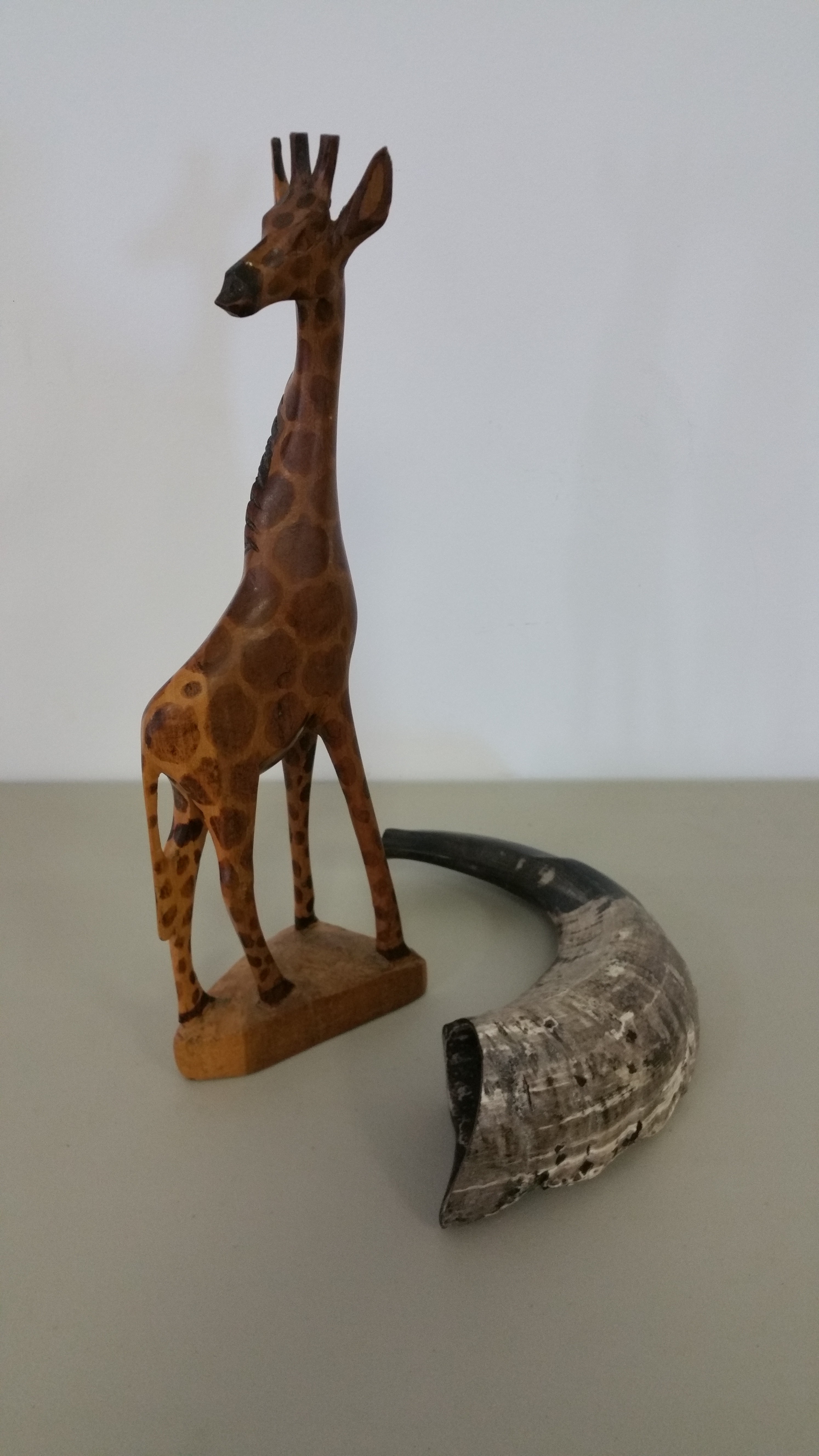 Under normal light, we still get a brighter shot from the iPhone than the Note 4. In fact the Note 4 shot above looks like a low-light image. The iPhone shot looks warmer, which means it’s not as accurate. 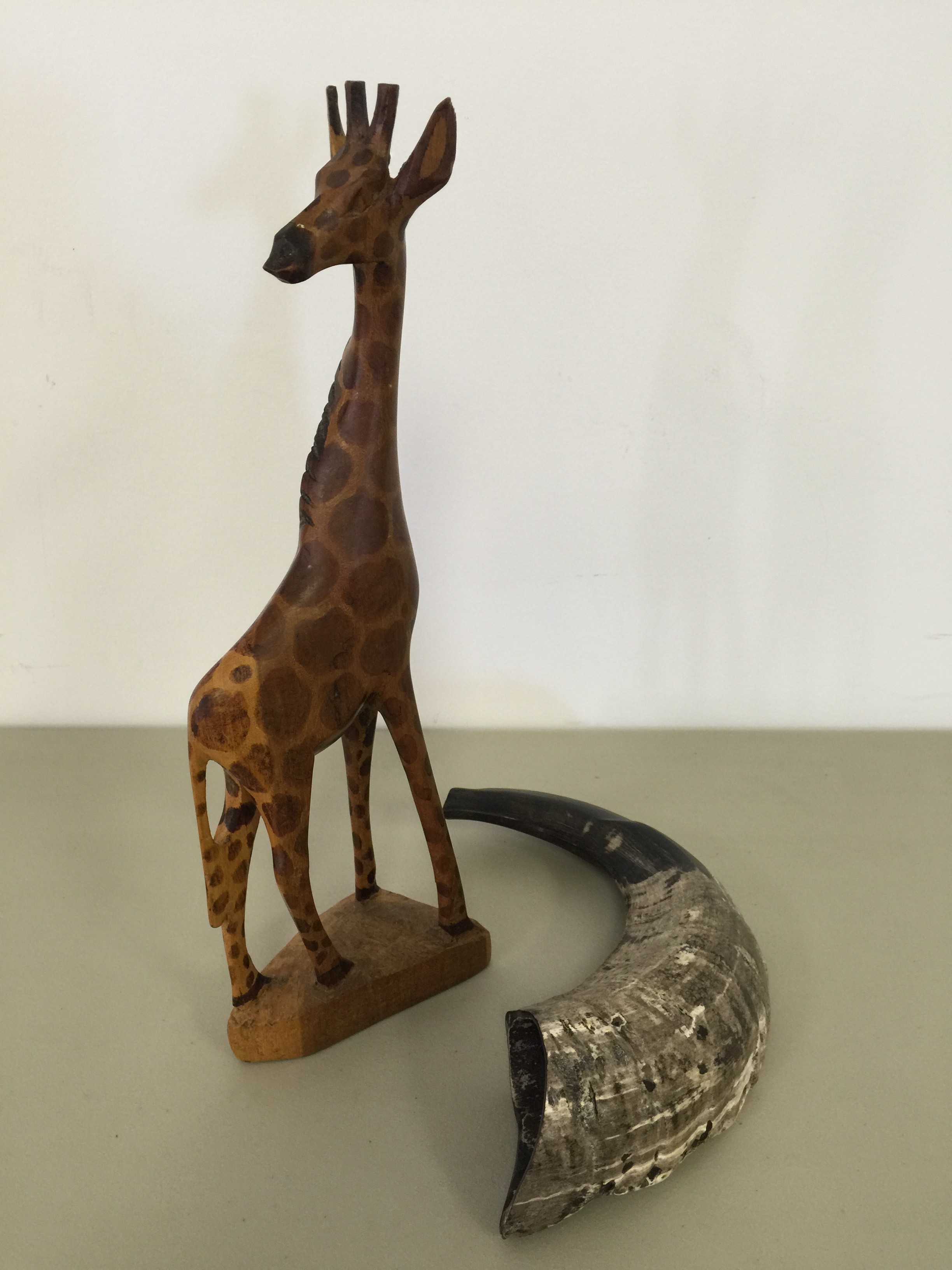 iPhone 6 Plus macro shot under normal lighting without flash.

If you click the two  images to see them a full size, you’ll notice the iPhone shot looks sharper and offers brighter exposure. Despite being a little too warm, we like the iPhone macro shots better than the Note 4’s.

Below notice the two shots taken of my church building at noon with the sun high in the sky. This puts the front of the building in the shadows, while the sun beats down on the white steeple. As with the other shots the iPhone produces a brighter image with a wider aspect ratio. The Note 4 gives us more accurate color. 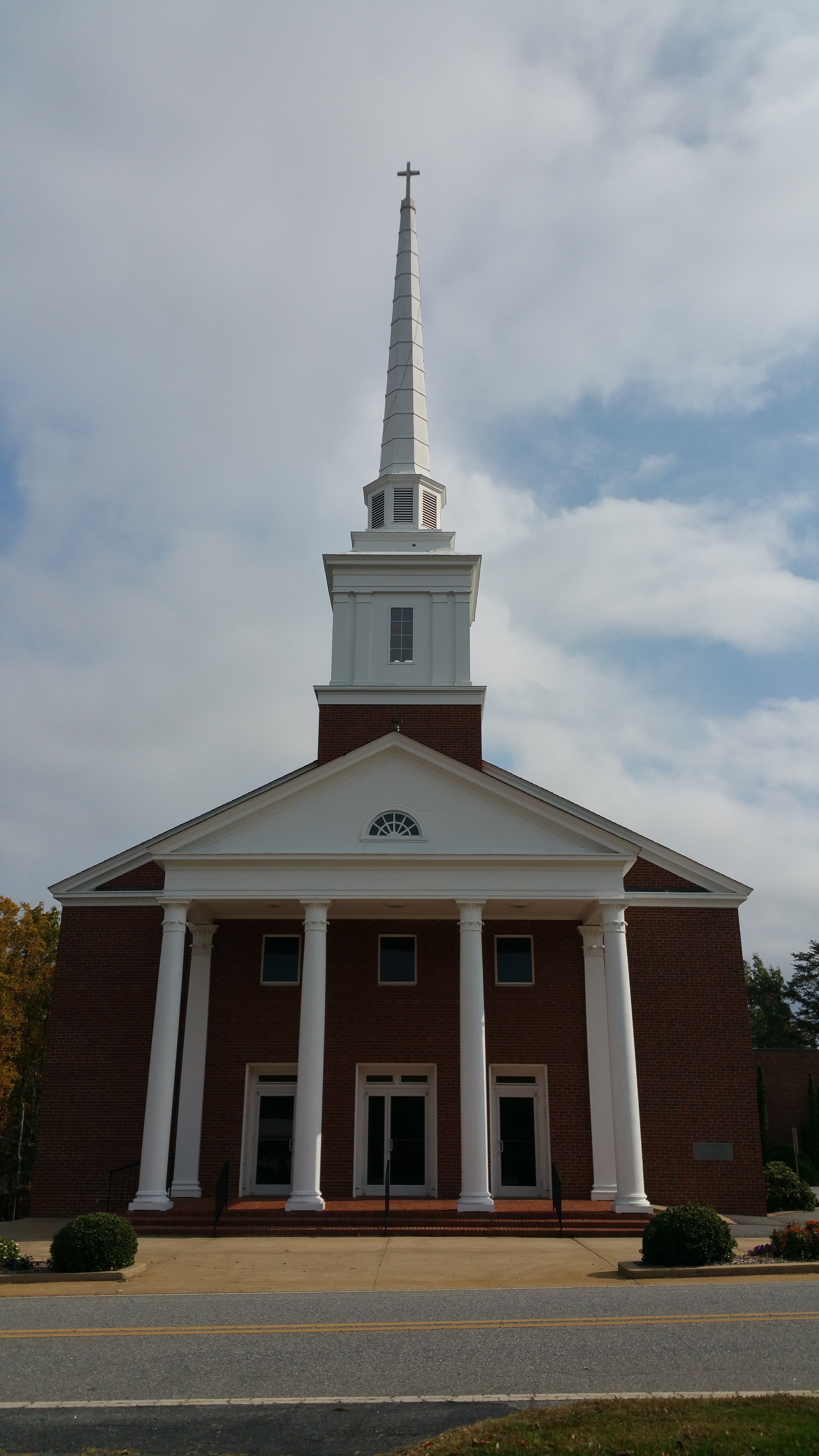 With this tall building, the wider 16×9 aspect ratio on the Note 4 produces a better composition. 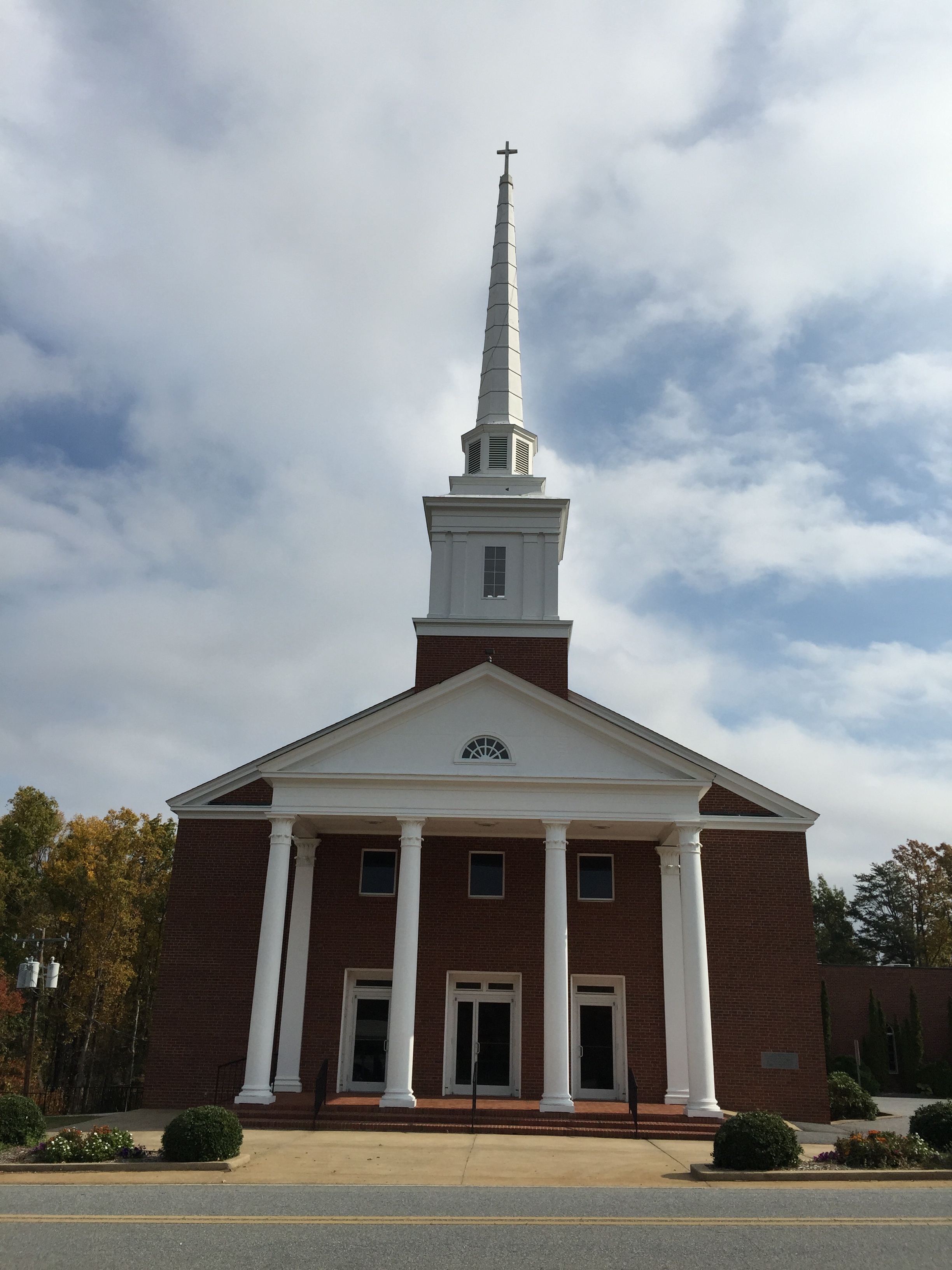 To show the detail, we put both shots side by side and displayed them a full size below. 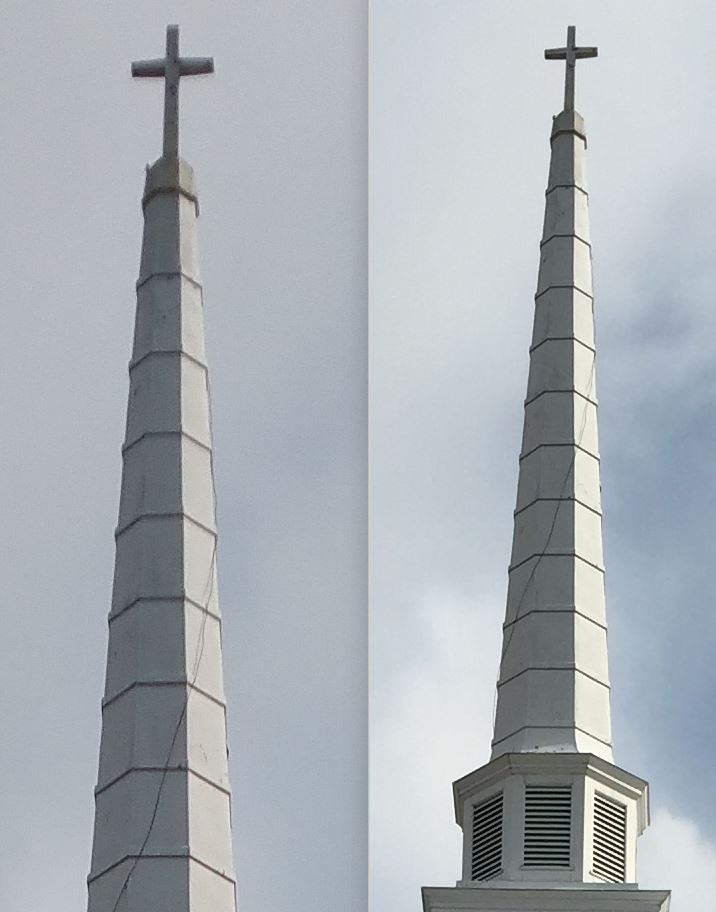 Side-by-side comparison of Samsung Galaxy Note 4 shot on left and iPhone 6 Plus shot on the right.

The iPhone gives a sharper image, but the Note 4 color looks more accurate. We call this a draw.

Look closely at the roof lines on the building in the Note 4 shot above. They’re jagged on the while the iPhone shot looks smoother. Also this is one of the exceptions where the exposure on the iPhone 6 Plus looks better, since the Samsung shot above shows the sky on the right side all blown out. iOS must turn on the HDR feature for panoramas, since the sky’s exposure looks great while the rest of the scene shows up brighter.

Finally, look at the bright orange tree on the left side. The iPhone 6 Plus shows the color more faithfully than the Samsung above it. This round clearly goes to the iPhone 6 Plus.

Night shots prove difficult for the best cameras, so it’s not surprising that neither phone produced a great shot. The Note 4 cuts off the green grass thanks to the narrower angle, however, it looks warmer.

Only a high-end camera will do this scene justice, but we give a slight nod to the iPhone 6 Plus.

The iPhone 6 Plus clearly wins this category because of the Burst mode and faster shutter release. The Samsung Galaxy Note takes a second to take shots after tapping the screen or pressing the volume button shutter release. This means a lot of missed action shots, unless the person gets good at timing them. Still, the Note 4 does take good images, offers its own burst mode and with some practice can get interesting actions shots, as we see below.

Compare the shot above with this one taken with the iPhone 6 Plus.

Both shots do a good job of freezing the action, however, the delay for the first shot on the Note 4 makes the iPhone 6 Plus more effective. Here’s the Note 4 bust shot selection screen, where users pick the best of their burst mode shots.

The Note 4 Burst Shots selection screen lets users save just one or all of their bust shots.

Here’s a look at the Burst Mode selection screen on the iPhone 6 Plus.

Action taking Burst Mode shots on the iPhone 6 Plus, the Photos app lets the user select the best shot and either save or discard the rest of the photos.

Watch a sample video taken on the Samsung Galaxy Note 4 camera below.

Here’s a sample from the iPhone 6 Plus camera.

Both cameras shoot nice HD video, so we can’t choose a winner.

Apple touted the iPhone’s slow motion feature, but the Samsung Galaxy Note 4 also shoots in slow motion. The iPhone 6 Plus produces 240fps while the Note 4 can shoot up to 120fps, but also offers three speeds.

Here’s a Note 4 sample taken on a cold day in November with sleet falling on my windshield.

Next I shot this sample on the iPhone 6 Plus. When the car windshield wipers slides across the windshield at about the 58 second mark, we get the full effect of the slow motion.

In real-world testing there’s not enough of a difference between the two videos to give one the advantage. The iPhone shoots in a higher fps, but the Note 4 offers more versatility with three speeds plus something called Smooth motion. It’s a draw.

There’s one trick the iPhone 6 Plus can’t do. Here’s a sample of 4K video shot at the World Series on the Samsung Galaxy Note 4.

The 4K quality looks great, but takes up a lot of space, so shoot sparingly and only in settings where it really matters.

While shot quality makes the most difference, photo organization and editing matters too. In this Samsung Galaxy Note 4 vs iPhone 6 Plus camera comparison we also take a look at sharing, editing and organizing features. We’ll start with the Camera apps themselves. 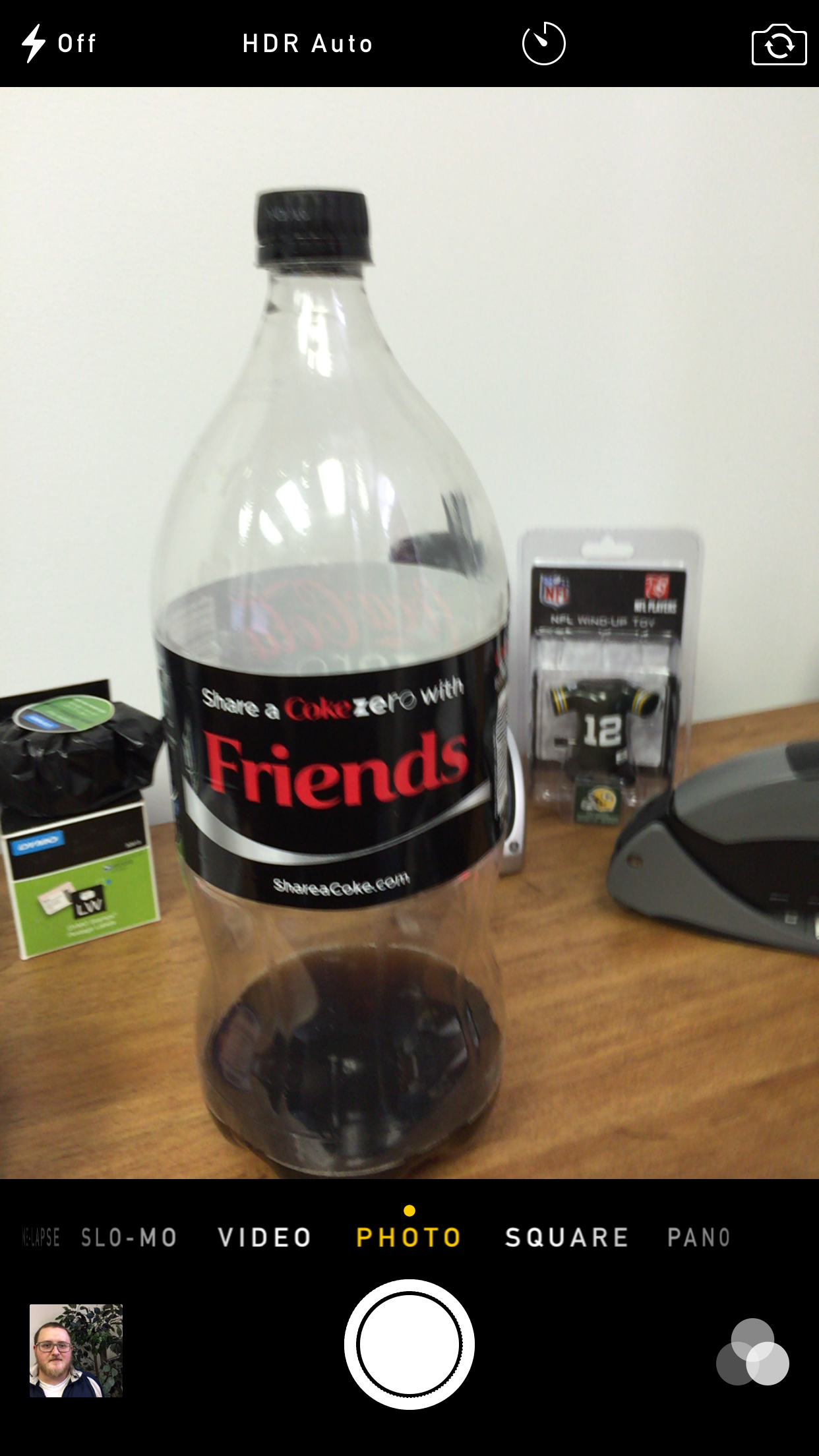 The iPhone 6 Plus camera app gives users the basic functions like flash, HDR, timed shots and live filters, but Samsung offers more features on the Note 4 camera. Some of them come from the Galaxy App Store while Apple now lets third-party developers add filters and features to the iPhone camera. Both cameras can shoot… 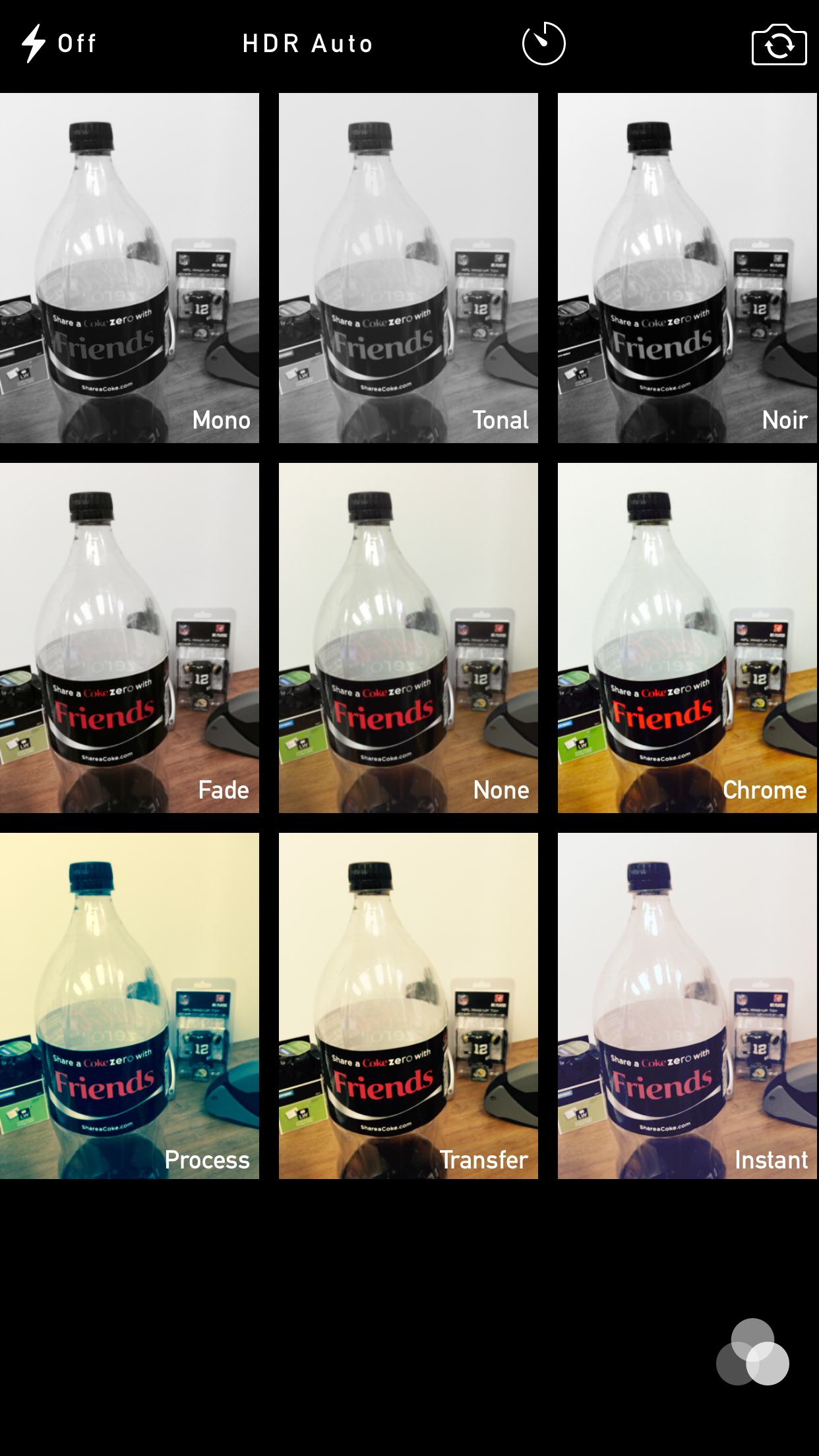 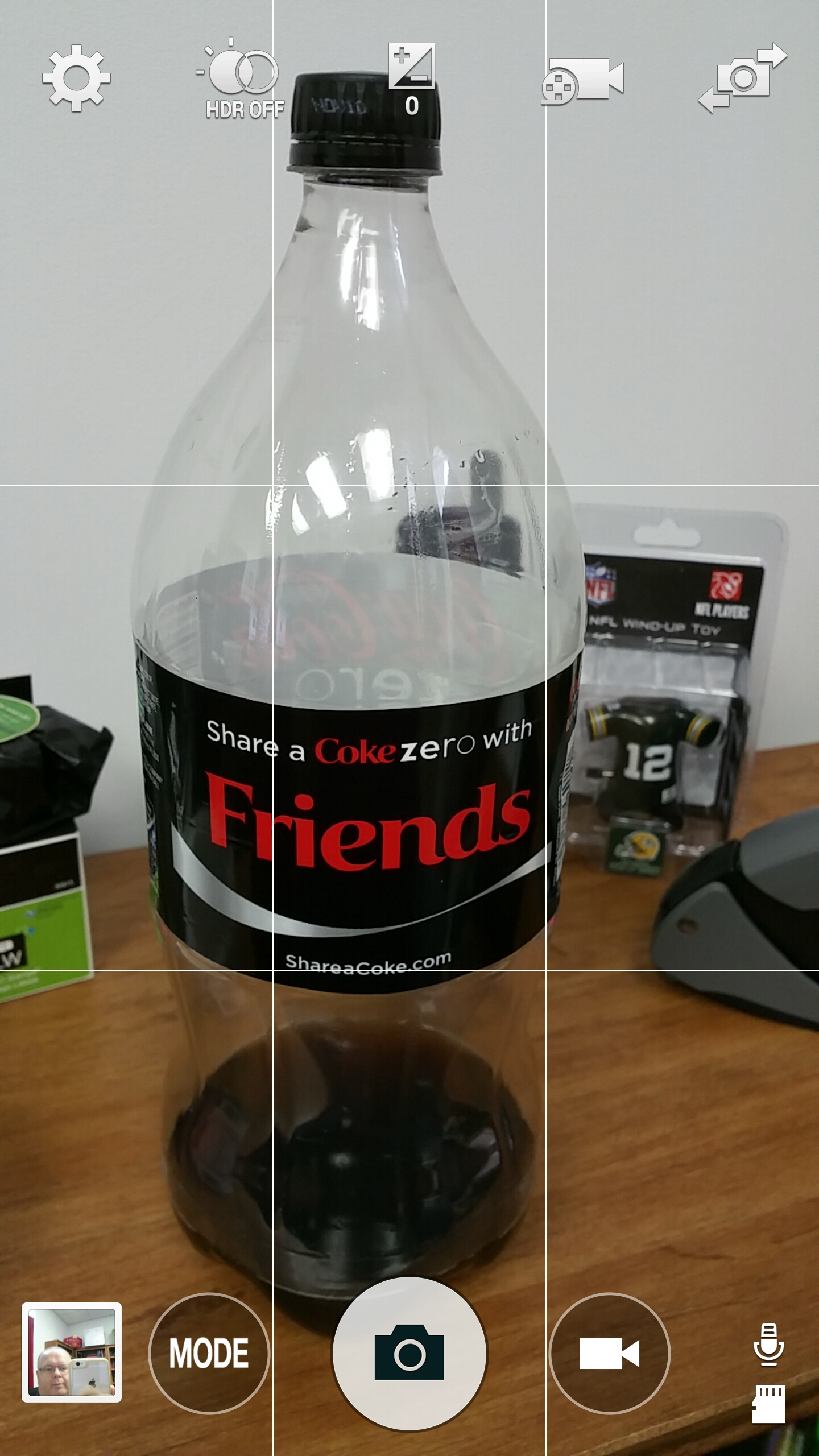 The Note 4 camera also offers more granular control over shooting settings. They’re easy to find. Tap the settings icon on the top the left corner and a grid camera option button show up. Tap and drag one to the main toolbar across the top to customize the center 3 settings buttons.

Use these mode buttons from the grid or tap and drag them to the top toolbar for quicker access.

The Note 4 includes more shooting modes, some of which seem awfully niche. A few come preinstalled, but the user can download others. This includes things like a Beauty Face mode, Panoramas, Sports, Selective Focus, Dual Camera (takes shots with both cameras at once and super-imposes the front facing shot onto the rear-facing shot), and more. The Note 4 camera app offers more features, but fans of simplicity will prefer the iPhone. 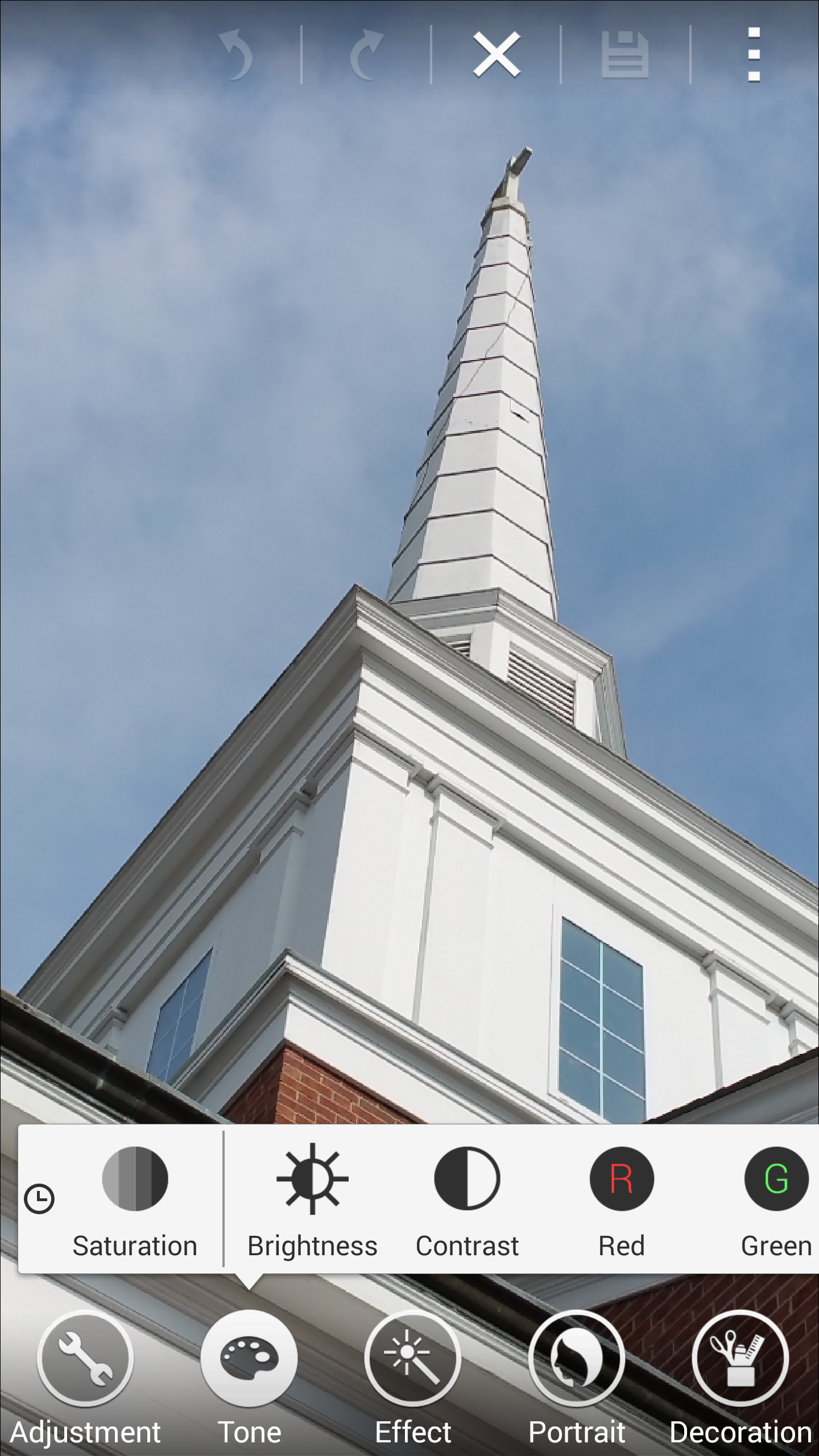 On each device the software lets users do simple editing of their photos including basic color correction, cropping and rotation, exposure fixes and filters or effects. The Samsung photo editing features (see above) offer more options than the iPhone 6 Plus (see below). Some of the Samsung features seem silly, like putting “stickers” on top of images or adding ugly borders. User can do more advanced photo editing with the Samsung Galaxy Note 4. 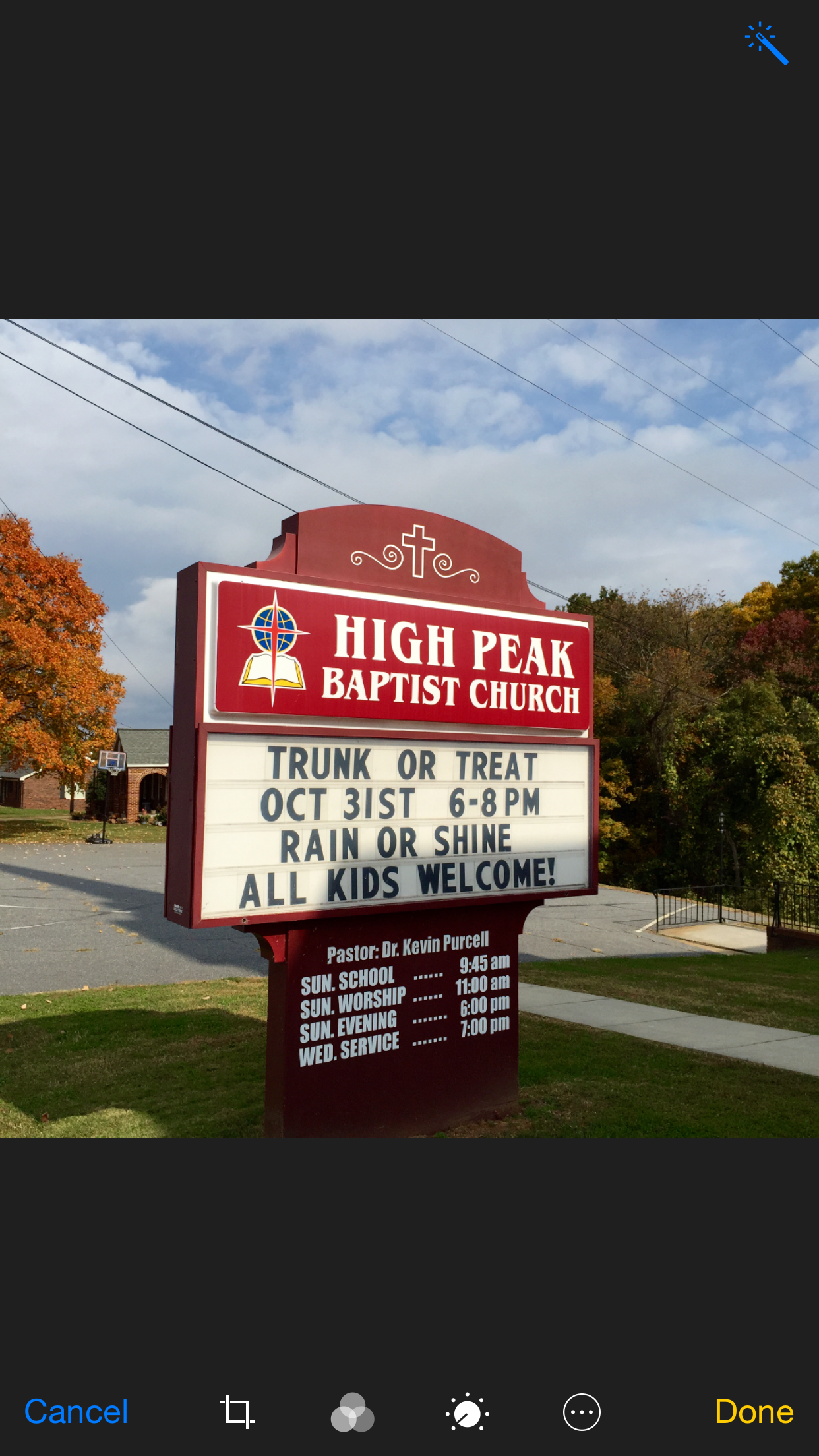 People who want lots of features will love the Note 4, while iPhone owners will not feel disappointed. They’re not missing out on anything necessary. Thanks to the new iOS 8 sharing feature, the user can open shots in their favorite editing app. Since the Note 4 does offer more editing features, we give it the nod.

To summarize the iPhone’s strengths, it produces brighter shots with a more traditional photographic 8×10 aspect ratio, and offers a simpler interface. The Samsung Galaxy Note 4 gives us more detail in most shots, except the panoramic shots, and gives users a wider variety of shooting modes and editing tools. The Note 4’s shoots with a narrower angle, but this brings the photographer closer to their subject. The iPhone produces shots with more of the scene in the image.

Which phone gives users a better camera? If forced to choose, the Samsung Galaxy Note 4 takes better shots in more situations and offers a larger variety of shooting and editing options. But it doesn’t win by a wide margin. One might call it a photo finish.